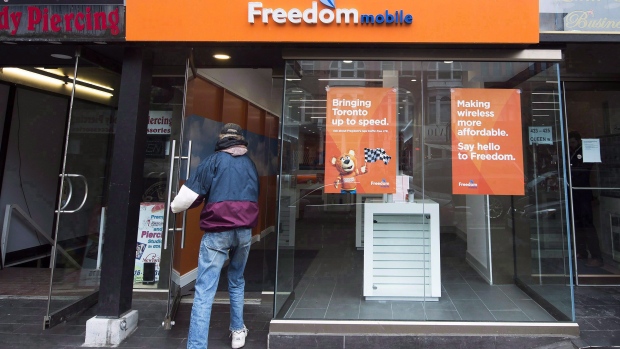 The arrival of Apple devices at Freedom Mobile last month has transformed the way it's competing against Canada's three big national wireless carriers, Shaw Communications said Thursday after it reported a big boost in wireless subscribers in the quarter before it landed the iPhone.

The Calgary-based cable, internet and satellite company (SJR.B.TO) is a relatively new player in Canada's wireless market but Shaw president Jay Mehr told analysts he thinks Freedom Mobile is ready to take on the Big Three.

"It does feel like a new business, starting in December," Mehr said on a conference call to discuss Shaw's results for its fiscal 2018 first quarter, ended Nov. 30 -- just prior to the addition of Apple's products to its lineup for the first time.

Among other things, Shaw added 34,000 wireless subscribers during the months of September, October and November, bringing its total number of wireless customers to 1.18 million.

Wireless revenue climbed 26.8 per cent to $175 million, while wireline revenue fell 0.4 per cent to $1.08 billion as the number of wireline subscribers fell by approximately 34,000 in the quarter.

The quarter's wireless additions were more than triple the 9,500 net additions in the comparable months of 2016, which was a low point for Shaw since it bought Wind Mobile on March 1, 2016.

Mehr said that the arrival of Apple at the beginning of this year's fiscal second quarter, which began Dec. 1 has "changed all aspects" of Shaw's wireless business -- now named Freedom.

Until reaching its first commercial deal with Apple, Freedom sold few phones and focused almost entirely on customers who used their own devices (BYOD) and generated about $37 per month in average revenue per user (ARPU). It began upgrading its network to fourth-generation standards last year, allowing it to offer Apple products.

With the arrival of the iPhone, which can only work on the portions of Freedom's network that has been upgraded, Shaw is aiming to push Freedom's ARPU above $50 per month.

"In Q2, we haven't put any energy into BYOD ... It's hard to say two things at once and we've been saying iPhone as loudly as anyone will listen," Mehr said.

Among those listening were Shaw's biggest competitors, who ramped up their pricing promotions in December and wooed away many of Freedom's established customers.

In fact, Mehr admitted, Freedom had a record number of deactivations over a period when Rogers (RCI.B.TO), Telus (T.TO) and Bell (BCE.TO) suddenly dropped some prices in limited-time offers.

"To be clear, our 3G base is exposed to those kinds of things ... We were certainly exposed over those four or five days," Mehr said.

"Our gross sales held up nicely and we continued to get lots of movement from the Big Three, but they got some movement from us over that period of time."

He also admitted that the intense competition from the Big Three may have reduced Shaw's optimism about the second quarter ending Feb. 28, but predicted it will be "meaningfully stronger" than it has ever been before.

"If the Big Three want to activate the market, we'll win because we'll benefit from people shopping around," Mehr said.

He added that ARPU will pick up in the third and fourth quarters of Shaw's fiscal 2018, which ends Aug. 31, and continue into its 2019 fiscal year.

Analyst Drew McReynolds of RBC Dominion Securities wrote in a note after the call that "this incremental impact will remain manageable for BCE, Rogers and Telus."

McReynolds also wrote that he'd had expected a relatively soft first quarter from Shaw but the results were still slightly below his estimates, with Shaw's adjusted earnings affected by heavy promotional spending in its consumer business.

Aravinda Galappatthige, of Canaccord Genuity, had a similar reaction to results from Shaw's wireline businesses -- which includes cable and internet services for homes and business.