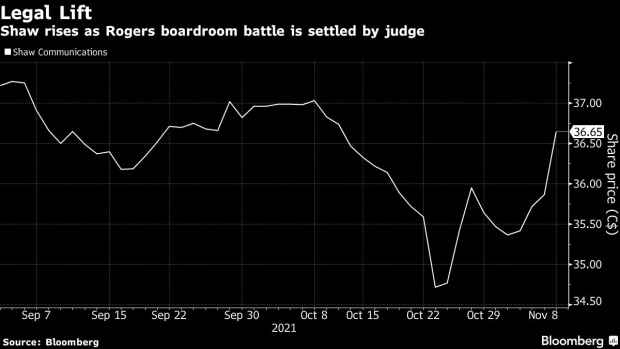 (Bloomberg) -- Shaw Communications Inc. rose as much as 3.1% after a Canadian court gave Edward Rogers board control of Rogers Communications Inc. -- settling, for now, a legal dispute that was threatening to delay a takeover deal between the two companies.

Calgary-based Shaw fell 6.2% from Oct. 8 to Oct. 25 as a power struggle within the Rogers clan erupted into public view, causing investors to question whether the companies would be able to get the deal done in the first half of 2022. The Supreme Court of British Columbia ruled in favor of Edward Rogers on Friday after the market closed, giving him the right to replace five directors on the 14-person board.

RBC Capital Markets analyst Drew McReynolds raised Shaw to outperform from sector perform, saying the resolution of board control appears “sufficiently adequate” for Rogers to continue the work of getting regulatory approval for the takeover.

“There is closure and clarity regarding the legal issues,” BMO Capital Markets analyst Tim Casey said in a note to investors Monday.