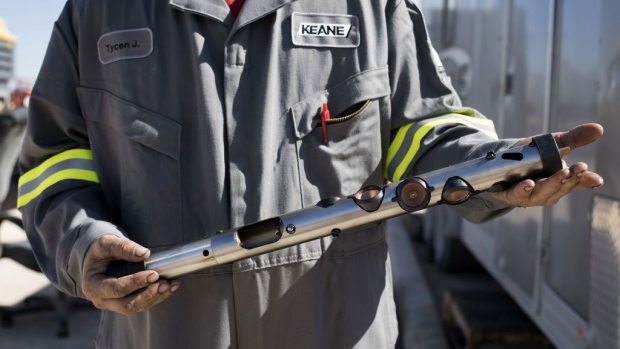 A worker displays a hydraulic fracturing perforating gun, used to penetrate the shale rock underground, for a photograph at a Royal Dutch Shell Plc hydraulic fracking site near Mentone, Texas, U.S., on Thursday, March 2, 2017. Exxon Mobil Corp., Royal Dutch Shell and Chevron Corp., are jumping into American shale with gusto, planning to spend a combined $10 billion this year, up from next to nothing only a few years ago. Photographer: Bloomberg/Bloomberg , Photographer: Matthew Busch/Bloomberg

(Bloomberg) -- Royal Dutch Shell Plc should use an activist investor’s push to break up the company as an opportunity rather than a threat, according to analyst Paul Sankey.

“We put it to Shell management: This is your chance to get out of strategic jail!” Sankey wrote in a note Thursday. “Blame the mean N.Y. Hedge Fund for forcing your hand, and use this opportunity for radical change.”

Dan Loeb’s Third Point LLC said Wednesday it has taken a stake in Shell and said the energy major would benefit from breaking off its liquefied natural gas, renewables and marketing businesses into a standalone company, in the process separating the legacy oil and gas operations.

Sankey, who previously worked at Mizuho Financial Group and Deutsche Bank AG and now runs his own firm, Sankey Research, said he’s in complete agreement with Third Point’s analysis that the mixing of Shell’s businesses is responsible for its low valuation compared with its peers.

He added that Shell could be split four ways: LNG-to-power, refining and chemicals, a Shell-branded gas station business, and a conventional oil and gas producer that Sankey said should be based in Houston.