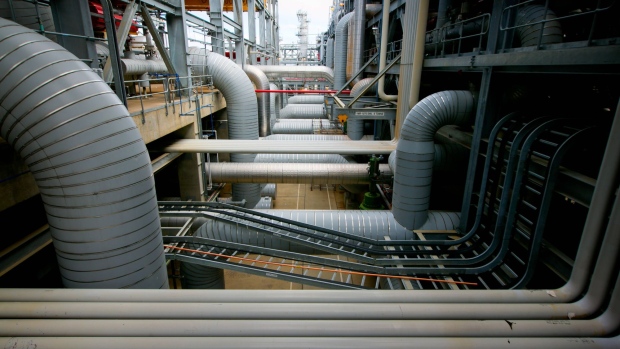 Gas pipes run through a plant at the Queensland Curtis Liquefied Natural Gas (QCLNG) project site, operated by QGC Pty, a unit of Royal Dutch Shell Plc, in Gladstone, Australia, on Wednesday, June 15, 2016. Gas from more than 2,500 wells travels hundreds of miles by pipeline to the project, where it's chilled and pumped into 10-story-high tanks before being loaded onto massive ships. Photographer: Patrick Hamilton /Bloomberg , Bloomberg

Global LNG demand took a severe hit when nations imposed lockdowns to combat the spread of the coronavirus, impacting the fuel’s use in everything from power plants to transport and factories. That came on top of the biggest glut of the fuel the world has ever seen, helped by two mild winters in a row.

“We still very much believe that with the current supply-demand outlook, this is a fundamentally strong sector that will grow at a rate that is close to 4% per year, Ben van Beurden, Shell’s chief executive officer, said in an interview.

His comments show that Shell is sticking to the optimism showed in its annual LNG Outlook in February, before the Covid-19 pandemic started to ravage markets on a global scale.

But even the global leader will feel some pain in the short term. Shell warned in April that its gas liquefaction volumes may fall in the second quarter.

The company and its peers slashed spending to cope with the collapse in oil prices. International majors have cut capital spending by 20% to 30% with projects being put on hold or shelved altogether. Shell walked away from the multibillion-dollar Lake Charles LNG terminal in March because of the glut, but Chief Financial Officer Jessica Uhl has said production cuts across its oil and gas portfolio would not be permanent.

Shell became the world’s top participant in the LNG business after the acquisition of BG Group Plc in 2016, which boosted its portfolio of supply contracts and stakes in LNG plants around the world.

“We will obviously flex our investment program to be aligned with where we believe the sector will go, but the profitability of the business and the outlook of this business is going to be as good as what you saw before the pandemic,” van Beurden said.

Gas prices in Europe, one of the key consumers regions, could also “surprise to the upside” in the next two to three years as the glut gradually disappears, Timera said. The recovery has already started as lockdown measures are lifted and demand could be back to normal in the next few months, the company said.