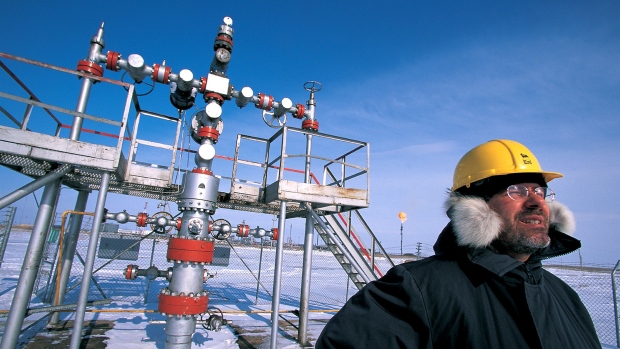 A file photo from Eni SpA shows their operation in the Karachaganak gas condensate field in northwest of Kazakhstan. , Nariman Gizitdinov

(Bloomberg) -- Royal Dutch Shell Plc, Eni SpA and their partners in the Karachaganak oil and gas venture paid $1.3 billion to settle a long-running dispute with Kazakhstan over revenue sharing.

The deal unlocks plans to boost output from the Karachaganak field and funnels additional revenue to the Kazakh economy, which is heading for its first annual contraction in more than two decades amid oil’s slump. While the government is getting less cash than it demanded last year, it’s a larger payment than initially agreed in 2018.

On top of the $1.3 billion cash settlement, the partners approved the final terms of production sharing, with Kazakhstan getting as much as $600 million through 2037 with oil at $40-$50 a barrel, the country’s Energy Ministry said Monday.

The Karachaganak field, one of Kazakhstan’s biggest hydrocarbon deposits, is jointly operated by Shell and Eni with a 29.25% share each. The other partners are Chevron Corp., Lukoil PJSC and state oil company KazMunayGas National Co.

With the five-year spat settled, the partners can press ahead with a planned $1 billion expansion project “to support the output plateau,” the ministry said by email.

Kazakhstan has a history of disputes with international investors over its energy projects. In 2012, the Karachaganak partners sold part of their stakes to the state to settle a row over taxes and costs. The most recent disagreement began in 2015 after the government demanded a greater share of revenue from the venture. It had sought as much as $1.8 billion for claims related to cost recovery and profit distribution, according to Lukoil.