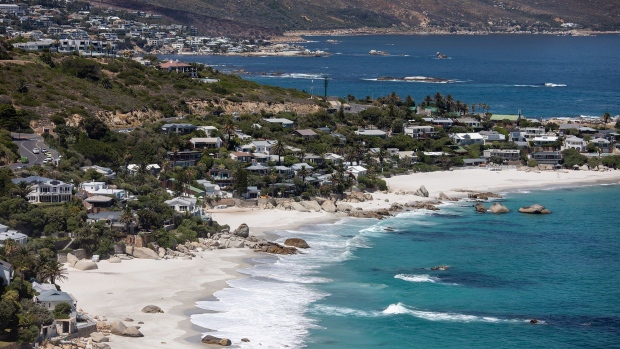 Empty Clifton beaches, closed due to Covid-19 restrictions, in Cape Town, South Africa, on Monday, Jan. 11, 2021. The pandemic and restrictions imposed to contain it have devastated Africa's most industrialized economy, and the extension of curbs that came into effect at the height of the holiday season bode ill for efforts to engineer a rebound. Photographer: Bloomberg/Bloomberg , Photographer: Bloomberg/Bloomberg

The standoff is the latest example of environmental groups’ push to halt oil and gas developments before they even get going -- an effort that has been buoyed by an International Energy Agency report saying no new fields can be tapped if the world wants to prevent damaging climate change.

In the U.K. North Sea, Shell’s Jackdaw project last month failed to get environmental approval from the regulator. Another, the Cambo oil development operated by Siccar Point Energy Ltd. and co-owned by Shell, had to delay works earlier this year while waiting for regulatory consent following pressure from Greenpeace on the government to block the field.

In South Africa, activists including Cape Town-based Just Share are arguing that Shell seismic surveys planned over the next two months -- off what’s known as the country’s “Wild Coast” where whales are frequently spotted -- could be detrimental to the environment. They also say the activity was granted through a process that’s not in line with evolving policy to mitigate climate change.

“Shell has long experience in collecting offshore seismic data and the welfare of wildlife is a major factor in the stringent controls we use,” a company spokesperson said in response to questions from Bloomberg. Sounds used in the survey process are increased slowly to allow any animals to move away from the source, according to the company.

After protests in Cape Town anticipating the arrival of the vessel that will conduct the survey, South Africa’s environment department noted the activists’ concerns, but said it was not mandated to make a decision on the matter and that a 2014 process around survey applications remained valid.

Shell acquired a 50% working interest and operatorship of the Transkei & Algoa exploration area off South Africa last year from Impact Oil and Gas Ltd., which holds the other half.