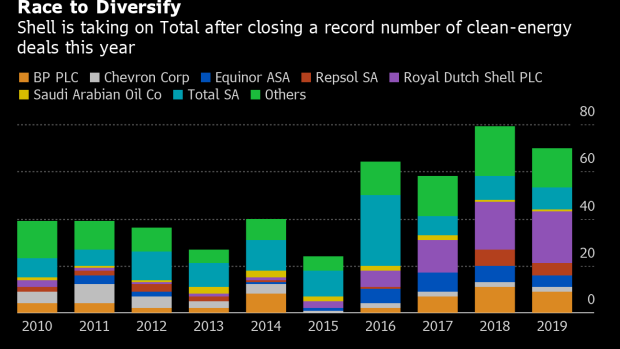 (Bloomberg) -- Major oil companies are poised to do a record number of clean-energy deals this year, with Royal Dutch Shell Plc leading a group of European majors that are well ahead of their U.S. rivals.

The data compiled by BloombergNEF underscore the quickening pace of the transition to low-carbon energy among the world’s largest fossil fuel producers, and the scale of the trans-Atlantic divide. European majors closed seven times as many deals with renewable-electricity and storage companies as their U.S. counterparts.

Oil companies have done about 70 deals in sectors including solar, wind and biofuels so far this year, already close to surpassing the total for the whole of 2018, according to the report. Seven companies account for about three-quarters of the number of deals since 2010, all are European-based aside from Chevron Corp. and Saudi Arabian Oil Co.

Smaller projects have become more popular recipients of funding and acquisitions, with digital and efficiency technologies outstripping all other investment categories since last year. After those two areas of focus, solar has become increasingly popular, said Doherty.

Shell has taken second place for the number of clean-energy deals done since 2010, and has usurped Total SA as the most active investor this year, the report shows. The Anglo-Dutch company’s experiments with flying wind turbines are a contrast to Chevron, BP Plc and Repsol SA, which have concentrated on portfolios closer to their core business operations, such as electric-vehicle charging infrastructure.

Solar technology dominates Total’s portfolio, with more investments made in the sector than every other technology combined. The company has installed 1.7 gigawatts worth of solar capacity, according to BloombergNEF.

Chevron has become the most active investor in carbon capture, even as the development in technology has slowed in recent years compared to renewables, said Doherty. Aramco has mirrored the approach of BP and Chevron, acquiring stakes in select companies that reflect its current operations, with two investments in the past two years.

Oil companies may put more of their cash into hydrogen in the future, said Doherty. “As the role of hydrogen grows and hydrogen production costs fall, the interest of the oil and gas community is likely to increase, and with it investment,” he said.

To contact the reporter on this story: Timothy Abington in London at tabington@bloomberg.net

To contact the editors responsible for this story: Alaric Nightingale at anightingal1@bloomberg.net, James Herron, Helen Robertson