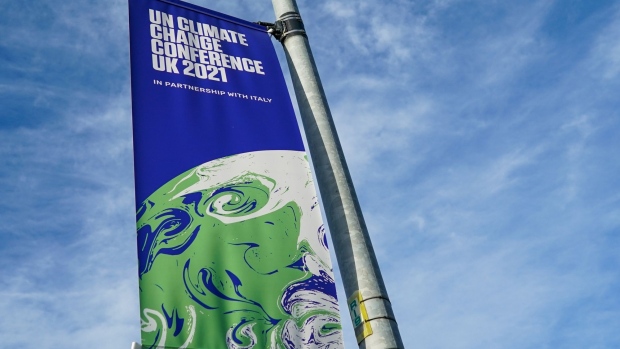 A banner advertisings the upcoming COP26 climate talks in Glasgow, U.K., on Wednesday, Oct. 20, 2021. Glasgow will welcome world leaders and thousands of attendees for the crucial United Nations summit on climate change in November. , Photographer: Bloomberg/Bloomberg

Thousands of delegates will gather in Glasgow in a few days for United Nations talks aimed at staving off catastrophic climate change. Just 80 miles north of the city, a tree-planting project in the Scottish Highlands underscores one of the toughest issues they’ll have to entangle.

The Glengarry project aims to plant about 1 million trees in five years. It’s part of a growing network of initiatives all over the world to boost natural sinks that can suck up carbon dioxide and help cool the planet. But the important work has become mired in controversy because financial backers sometimes make unrealistic claims about the environmental savings the projects deliver — and use that as a license to justify ongoing pollution.In Glengarry, the 5 million pound ($6.9 million) funding comes from Royal Dutch Shell Plc. It isn’t generating credits yet, but when it does, it will become part of a portfolio that the oil giant uses to claim it has helped neutralize the environmental impact of its fossil fuels. For example, for the past two years, British and Dutch drivers have been told they’re refueling their cars with “carbon-neutral” gasoline.An investigation by Greenpeace and the nonprofit Source Material published Monday says those claims are questionable. The Scottish government told Greenpeace that it also plans to count the trees towards its national climate goals, risking the carbon removal being counted twice in the global tally of CO₂ emissions. Shell said its claims are in line with the current voluntary offset system, but hopes that governments can clarify the rules at COP26.“It's a problem if companies count reductions which countries are already counting,” said Gilles Dufranse, policy officer at the nonprofit Carbon Market Watch. “The maths can still add up at inventory level, but basically the claims by companies are put into question.”

Without certainty, it’s hard for companies to make such bold claims to customers. It’s one of the reasons why this year the Dutch advertising watchdog told Shell to halt a “misleading” marketing campaign based on offsets. Shell didn’t appeal the ruling.

The disagreement between Greenpeace and Shell is the latest in a long list of greenwashing accusations leveled at companies that use offsets. Negotiators in Glasgow could help settle the dispute if they come to a deal over rules for a global carbon market overseen by the UN. If global consensus is reached on how to define offsets and use them, the UN market could begin to replace the unregulated private trades that have boomed in recent years.“The U.K. is working on laying the foundations for a credible and responsible global carbon trading system,’’ a spokeswoman for the U.K. Business and Energy Department said in response to questions about the Glengarry project.

The company has invested in the Katingan project in Indonesia, which aims to protect peat bogs from illegal logging. The project started selling credits in 2017, but the Indonesian government declared the land a protected area two years later, lowering the risk of deforestation. Greenpeace argues that Shell should rework its calculations for carbon savings to take this into account, or stop using the project in its green marketing.

Shell also uses the Cordillera Azul project in Peru, which seeks to conserve 1.6 million hectares of forest, to back up its carbon-neutral advertising. However, the area was already a national park that had enjoyed protected status for seven years by 2008 when the company started claiming credits.

Shell said that it will work with the owner of the Katingan project to fully understand the impact of the new protections on the land. In response to questions about the project in Peru, it said that it always uses credits that are verified by independent third-parties.

Until governments can agree on a global framework for trading offsets, environmentalists will continue challenging claims made by companies. That’s why businesses are eager for clarity on rules from the UN, and hundreds of corporate polluters and sustainability experts are working in a separate process led by finance veterans Mark Carney and Bill Winters to develop their own set of standards.

The stakes are high: Get it right, and the world will have a process for channeling much-needed funds to green projects, but get it wrong and companies could add billions of tons of carbon to the atmosphere without compensating for it in any meaningful way.