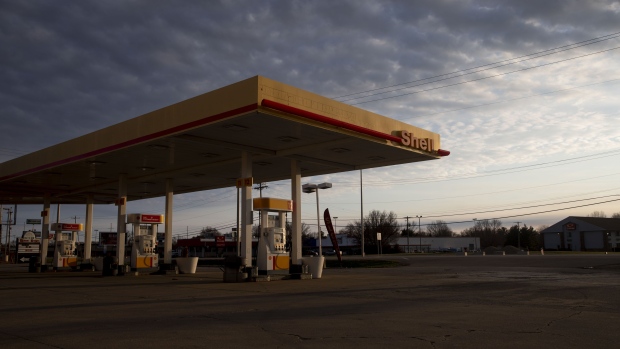 Fuel pumps stand at a Royal Dutch Shell Plc gas station in Princeton, Illinois, U.S., on Wednesday, April 1, 2020. Even with the combination of some Canadian pullback, stripper wells going offline and announced shale cuts, that may not be enough to stop oil prices from going lower as demand craters and supply from OPEC means major increases in stockpiles in the second quarter. Photographer: Daniel Acker/Bloomberg , Bloomberg

Europe’s largest oil company is bracing for permanent change in customer behavior, signaling demand may not fully recover once the coronavirus pandemic is over.

The global spread of the virus has roiled oil markets, dragging down profits at some of the biggest producers and promising worse to come next quarter. But the long-term impact on the way consumers work and travel could be even more devastating for the industry.

“My expectation is that there will be changes, and therefore we have to be ready for that,” Royal Dutch Shell Plc Chief Executive Officer Ben van Beurden said in a Bloomberg Television interview. “That means that we probably have to re-establish what is going to be our strategy.”

The Anglo-Dutch major on Thursday cut its dividend for the first time since the Second World War as the oil slump dragged first-quarter earnings down 46%. The company presented a bleak outlook, citing prolonged economic uncertainty, lower commodity prices, higher volatility and persistent weakness in demand.

Consumer lifestyles will probably “be altered for some time to come, whether that is because of the economic bandwidth that people will have or businesses will have, or whether it is because of attitudes,” Van Beurden said.

Attitudes have of course already been changing as the world shifts gradually toward cleaner forms of energy. Large oil companies, under increasing pressure from customers, governments and investors, have stepped up pledges to slash their carbon emissions.

Yet many, including Shell, haven’t provided a blueprint on how much they’ll invest in clean energy to fulfill their long-term pledges. Now, with the coronavirus crisis reshaping the entire oil market and the future of demand, such investment plans may be brought sharply into focus.