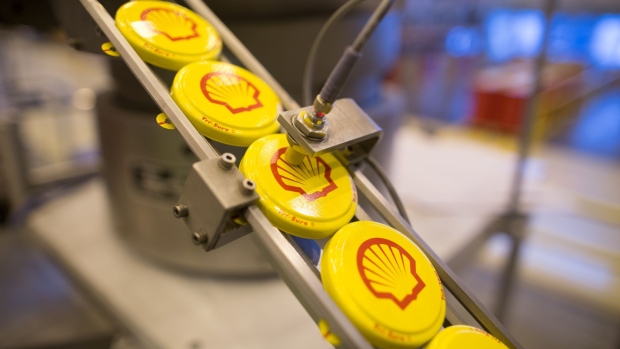 (Bloomberg) -- Royal Dutch Shell Plc responded to external pressure by setting a more ambitious target for cutting greenhouse gas emissions from its operations, while reporting an increase in third-quarter profit that fell short of expectations.

Like its peers, Shell has been lifted by the surge in oil and gas prices, but nevertheless finds itself pulled in many different directions by people unhappy with its plans. Dan Loeb’s Third Point Capital LLC is seeking the breakup of the energy giant, a move that would thwart its plan to keep pumping oil and gas as it embraces renewable energy. A Dutch court has also ordered the company to cut carbon emissions much faster than it had previously planned.

“This quarter we’ve generated record cash flow, maintained capital discipline and announced our intention to distribute $7 billion to our shareholders,” Chief Executive Officer Ben van Beurden said in a statement on Thursday. Combined with the more ambitious emissions target, “this is clear evidence of how we are accelerating our Powering Progress strategy, purposefully and profitably.”

Shell’s third-quarter adjusted net income was $4.13 billion, up from $955 million a year earlier but well below the average analyst estimate of $5.42 billion.

The company set an absolute carbon-reduction target of 50% by 2030, compared to 2016 levels on a net basis. The new goal covers Scope 1 and Scope 2 emissions, which are directly under Shell’s operational control, but not the Scope 3 emissions of its customers.

That compares with a its previous target of reducing the carbon intensity of its products by 20% over the next decade. Critics have criticized carbon-intensity targets -- a measure of the carbon released per unit of energy generated -- because they can allow companies to increase absolute emissions even as they hit their own environmental targets.