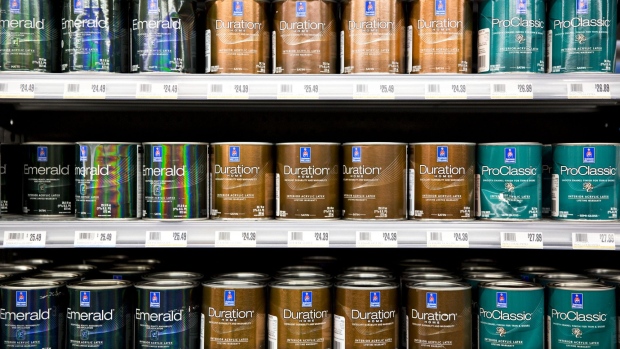 (Bloomberg) -- Sherwin-Williams Co. cut its outlook for the second time in three weeks after the paint maker said the impact of Hurricane Ida on the already-stretched supply chain was worse than originally expected.

Adjusted earnings will be $8.35 to $8.55 a share this year, down from a prior forecast of as much as $9.45, the company said Tuesday in a statement. Analysts had been expecting $9.26 a share on average. Revenue could fall in the third quarter, leading to full-year consolidated sales up high-single digits, compared with a prior expectation of high-single to low-double digits.

“Our suppliers are now reporting that the impacts of Hurricane Ida are more severe and will be longer lasting than initially thought,” Chief Executive Officer John Morikis said in the statement. “Production of several key resins, additives and solvents, expected to resume by late September, has been pushed out.”

The diminished forecast, coming after Sherwin-Williams lowered its third-quarter outlook Sept. 8, shows the extent of the challenges as companies across many industries deal with limited availability of raw materials and price inflation. The Cleveland-based paint giant said it no longer expects the situation to improve in the fourth quarter.