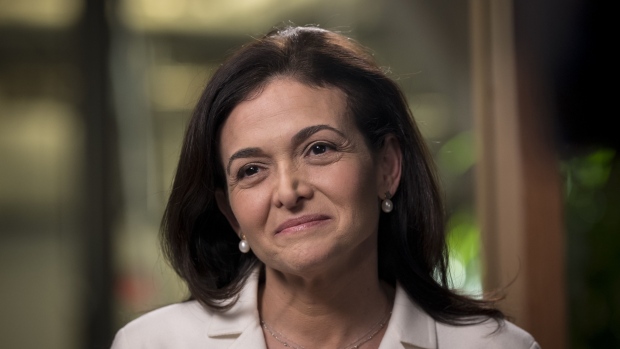 (Bloomberg) -- Sheryl Sandberg, who once sparred with the American Civil Liberties Union, is now one of its biggest benefactors, providing a $3 million grant to boost its political activities around access to abortion.

“This is as important as any civil liberty a woman can have, which is the right to control her own medical path, the right to choose when she has children,” the former Meta Platforms Inc. chief operating officer, who has three teenage daughters, said in a Zoom interview from California last week.

The fight “is going to take hard political money,” she added.

Sandberg’s gift, announced Tuesday, is one of the biggest abortion-rights grants ever received by the 102-year-old ACLU, according to its longtime executive director Anthony Romero. The money will give the ACLU’s political arm a “running start” against state anti-abortion efforts spurred by the Supreme Court’s overturning of Roe v. Wade in June, he said.

Abortion rights are rising to be one of the top concerns for Democratic voters in the midterm elections. The issue is driving Democratic hopes of holding onto Congress, but resonates through to local races.

“The action in the next two years is all at the state and local level,” Romero said in an interview. “It’s all about state supreme court judges, attorneys general. It’s about district attorneys and prosecutors, because now they have 14 states where abortion is unavailable and criminal.”

Sandberg, 53, with a net worth estimated by Bloomberg at $2.1 billion, has three teenage daughters. She said she’s eager to support the ACLU’s work as it fights to protect abortion at the ballot box because for her it’s “unfathomable” that her daughters will grow up with with fewer rights than she had.

Sandberg got to know Romero when she was on the defending side of an ACLU lawsuit. The organization sued Facebook in 2018 over alleged age, gender and race discrimination in the targeting features of its paid advertising products. Sandberg, who helped transform the social-media network into a juggernaut, worked closely with Romero and hammered out a sweeping 2019 settlement that, in her view, changed Facebook’s practices for the better.

Her grant, which is spread over three years to the ACLU’s political operation, isn’t tax deductible, unlike donations to the ACLU Foundation, which focuses on non-partisan litigation. While Sandberg’s donation won’t be recurring for now, it’s part of several she’s making to various abortion causes, she said, declining to name those organizations.

Abortion care has been severely limited in 17 states since the Supreme Court ruling, including 13 total bans, three partial bans and one state -- Wisconsin -- where providers have halted the procedure due to uncertainty in the law. Other states are pushing to pass bans and some politicians like Senator Lindsey Graham have called for a national ban after 15 weeks of pregnancy.

The ACLU’s state-level actions include a new lawsuit filed in Arizona on Monday, seeking clarity over which state law now covers abortion -- a total ban that’s been on the books for 150 years or a statute signed into law in March that restricts abortion after 15 weeks of pregnancy.

“The state of Arizona has caused complete chaos by seeking to enforce clashing abortion bans, including one of the most extreme in the country,” Nancy Northup, CEO of the Center for Reproductive Rights, said in a statement issued by the ACLU.

Donations to the ACLU, which has 1.4 million members, jumped after the 2016 election of former President Donald Trump, whose administration was sued dozens of times by the organization. The organization got another boost around 2020, amid racial strife in the US following the police murder of George Floyd.

“The ACLU has been a reliable, enduring force of good in this country for decades, especially during these turbulent last several years,” said one monthly donor, Katlyn Carlson, a New York-based film, television and stage actor. “When some new draconian Republican awfulness rears its ugly head, it seems like the ACLU is there to at least try to smite it.”

But the organization has its critics. Conservative groups have long complained about its influence in court. America First Legal Foundation, founded by several former Trump administration officials, had taken a page from the ACLU’s book and peppered the Biden administration with lawsuits challenging polices the group perceives as liberal.

“America First Legal is the long-awaited answer to the ACLU,” former Trump adviser Stephen Miller is quoted as saying on AFL’s website. “We are committed to an unwavering defense of true equality under law, national borders and sovereignty, freedom of speech and religion, classical values and virtues, the sanctity of life and centrality of family, and our timeless legal and constitutional heritage.”

Romero said the ACLU will use political funds to fight legislative battles over abortion, mobilize voters around down-ticket races and educate them on candidates’ views on reproductive rights. There is also a new focus on state judicial candidates who are often mysteries to members of the public, he said.

“In some states you don’t even know what party they’re affiliated with,” Romero said, referring to judges. “A little bit of money goes a very long way” in such races because local advertising is cheaper, while winners wield a lot of power, he said.

Deborah Archer, the ACLU’s first Black president, said the looming fight for abortion rights fits with the group’s other initiatives given the disproportionate impact on minority groups when reproductive rights are trampled, but it won’t draw attention from those issues.

In August, the ACLU was emboldened by voters’ overwhelming rejection of a Kansas effort to allow new restrictions on abortion. It was the first opportunity that voters had to weigh in on abortion rights after Roe was overturned. The ACLU spent almost $500,000 fighting the proposal, and the outcome took conservatives by surprise.

Next up is Michigan, where the ACLU has spent at least $6 million helping gather hundreds of thousands of signatures to get a measure on the ballot in November that would amend the state constitution to enshrine the right to abortion. The ACLU, in partnership with Planned Parenthood, got started on the process months before the Supreme Court’s draft decision was made public.

“We took a collective leap of faith that whatever was going to come out of the Supreme Court was not going to be good, and was going to be a threat to reproductive freedom in Michigan,”  Loren Khogali, executive director of the nonprofit’s Michigan chapter, said in an interview.

The ballot-initiative effort was supercharged by the Dobbs ruling. Khogali described arriving at a coffee shop to gather signatures after the decision was leaked and found a line of people wrapped around the block waiting, some of whom registered to vote for the first time so they could add their names.

The ACLU is supporting a similar initiative in Vermont, and fighting an anti-abortion proposal in Kentucky, where abortion is now illegal.

The organization is also hiring staff for a new team of criminal defense attorneys to represent women or health-care providers who may be charged for seeking or performing abortions.

Sandberg, a philanthropist whose own foundation champions inclusion for women in the workplace, has donated in the past to Planned Parenthood, which provides abortion and reproductive health services. But the gift to ACLU is her first to any organization since she left Meta. Romero said he hopes it will encourage other high-net worth individuals to do the same.

“I’m sure that Sheryl Sandberg’s willingness to engage on this issue personally and directly will embolden and encourage -- and nudge -- a couple of other counterparts in philanthropy,” Romero said.