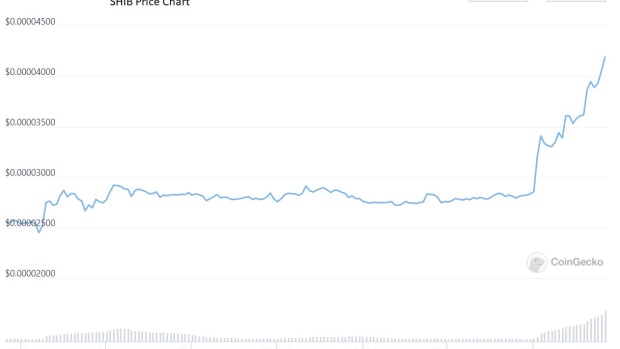 (Bloomberg) -- Shiba Inu soared to record highs over the weekend to become the 11th-biggest cryptocurrency by market value.

SHIB was up 50% in the 24 hours through 7:45 a.m. New York time on Sunday, according to pricing from CoinGecko.com, and reached a record earlier in that hour.

A petition on Change.org imploring Robinhood to list SHIB on its platform has almost 300,000 signatures. The token has gained more than 40,500,000% in the past year.

“Memes have value and have been an investible thesis in 2021,” Jonathan Cheesman, head of over-the-counter and institutional sales at crypto-derivatives exchange FTX, said in an email Sunday. He added, “lower dollar-price tokens are attractive to retail” because investors can still buy more than 20,000 SHIB for $1.

The SHIB ecosystem has also dropped a number of non-fungible tokens, or NFTs -- and a page for them says they’re currently sold out, though promises other packs are coming soon.

“With such memecoins it’s hard to speculate on the actual reasons for price movements, in all honesty,” said Vijay Ayyar, head of Asia-Pacific with crypto exchange Luno Pte., in a message Sunday. But “there are some interesting communities being built around them.”

Shiba Inu was founded in 2020 by an anonymous person going by the name Ryoshi, and the coin’s website refers to it as “a decentralized meme token that evolved into a vibrant ecosystem.”

It appears to have been made in the vein of Dogecoin, a cryptocurrency that was created as a joke in 2013, and also has a Shiba Inu theme. Dogecoin has since become a popular token that’s used for payments by some sports teams, AMC theaters and others.

Dogecoin is also up in the past 24 hours, according to CoinGecko. Its market value is about $33 billion, while Shiba Inu’s is around $21 billion. Both can be quite volatile.