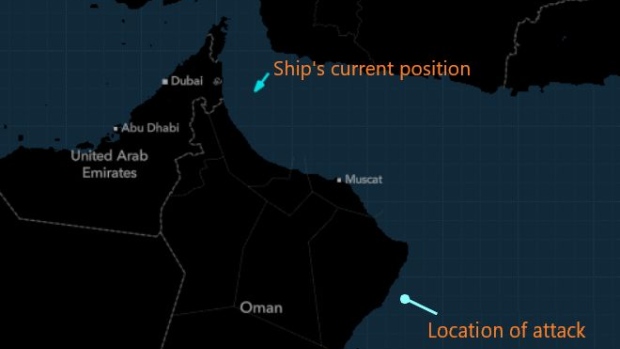 Mercer Street tanker was hit while sailing off the Omani coast , Bloomberg, UKMTO

Here is a snapshot of what’s happening with Iran, its nuclear talks and energy markets.

The U.S. vowed to respond against Iran for Thursday’s deadly attack on an Israeli-operated oil-products tanker in the Gulf of Oman. Tehran denied being responsible, but has been blamed by the U.S., U.K. and Israel.

U.S. Secretary of State Antony Blinken said he was “confident” that Iran used “one-way explosive” drones in the attack, which killed a British and a Romanian crew member on board the Mercer Street. The U.K. said “one or more” of the unmanned drones may have been involved.

“We are working with our partners to consider our next steps and consulting with governments inside the region and beyond on an appropriate response, which will be forthcoming,” said Blinken.

While shipping attacks in the Gulf of Oman have increased this year, they rarely result in fatalities.

Iran and Israel have traded multiple accusations of attacks on vessels in recent months. They’ve happened amid efforts by world powers to restore a 2015 pact that limited the Islamic Republic’s nuclear activities in return for an easing of U.S. sanctions, including on oil exports. Israel is against a lifting of sanctions or a revival of the deal.

A sixth round of talks in Vienna broke up last month without a deal. The U.S., European Union and Russia have been frustrated by Tehran’s stalling over a seventh round of negotiations, for which no date has been set.

The ship incident will prove a test for Iranian President-elect Ebrahim Raisi, an ultraconservative cleric who’s set to be sworn in on Thursday. He and Supreme Leader Ayatollah Ali Khamenei are expected to make speeches on Tuesday to mark the end of President Hassan Rouhani’s government.

The attack and the threat of a U.S. response have had little impact on oil markets so far, with Brent crude declining almost 1% to $74.75 a barrel in early trading on Monday. For now, investors are mostly focusing on the spread of the delta coronavirus variant and the tightening restrictions in some Chinese cities.

If U.S. sanctions on Iran are eased, many analysts think Tehran could increase oil production by around 1 million barrels a day within months.