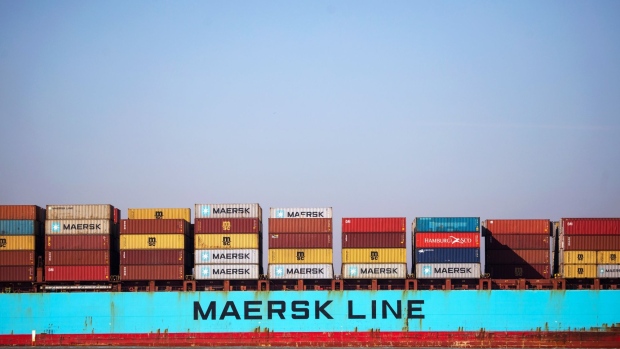 Shipping containers stand on the Maersk Gairloch container ship, operated by A.P. Moller-Maersk A/S, as it approaches the Port of Felixstowe Ltd., a subsidiary of CK Hutchison Holdings Ltd., in Felixstowe, U.K., on Wednesday, March 25, 2020. Legislation is being introduced by the U.K. Government that might close some ports in the event that there are insufficient border-force officers to maintain adequate border security. Photographer: Chris Ratcliffe/Bloomberg , Bloomberg

(Bloomberg) -- A century after the global shipping fleet ran largely on coal, the world’s largest shipping line is taking a historic step toward not using fossil fuels for propulsion.

All newly constructed vessels owned by A.P. Moller-Maersk will have to be able to use carbon-neutral fuels, such as clean methanol and ammonia, as well as traditional oil-based products, the company said in a statement. The shift comes just three months after the industry’s main regulator set new decarbonization rules that were criticized for their lack of ambition.

“If you don’t do this, ten years from now we risk becoming irrelevant,” said Morten Bo Christiansen, vice president and head of decarbonization at Maersk. “Our customers need us to do this.”

Alongside ammonia and clean forms of methanol, Maersk said so-called alcohol lignin blends were another primary candidate for future fuels.

Liquefied natural gas, or LNG, which has been embraced by some other shipping lines, is not part of Maersk’s strategy: “We don’t need another fossil fuel,” Christiansen said.

See also: How the World’s Ships Are Tackling Decarbonization: QuickTake

About half of Maersk’s 200 biggest customers have set science-based or zero-carbon carbon targets for their supply chains, or are in the process of doing so. The firm wants to have net-zero emissions from its operations by 2050, and helped found a research center focused on decarbonizing the industry.

While the new Maersk-owned ships will still be able to run on very low-sulfur fuel oil -- the product widely used be vessels today -- the firm will strive to use carbon-neutral fuels, Christiansen said. That’s despite the fact they will likely cost significantly more than oil-based options. Still, if marine fuel costs were to double, the price of a flat-screen TV in a shop would only rise by about $0.50-$1, Christiansen said.

Getting hold of enough carbon-neutral fuel will be Maersk’s biggest challenge, given the current lack of availability. The firm also plans to have a small container ship capable of running on e-methanol, or, bio-methanol on the water in 2023, which it hopes will offer fuel suppliers an incentive to scale up production of clean alternatives.

“Our ambition to have a carbon-neutral fleet by 2050 was a moonshot when we announced in 2018,” said Soren Skou, Maersk’s CEO. “Today we see it as a challenging, yet achievable target to reach.”