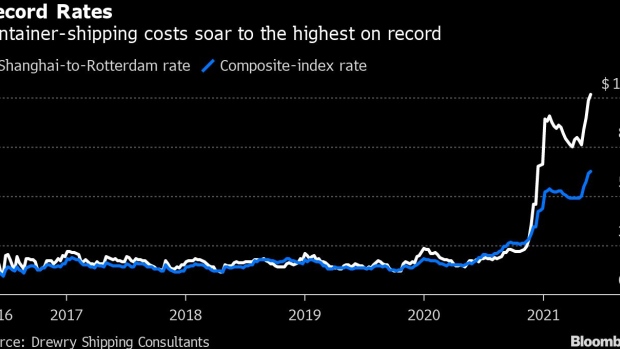 (Bloomberg) -- The cost to move goods in a shipping container to Europe from Asia shot above $10,000 for the first time on record, an index showed, underscoring the pain inflicted on exporters and importers struggling with stretched supply chains.

The Drewry World Container Index released Thursday showed the rate for a 40-foot container from Shanghai to Rotterdam rose to $10,174, up 3.1% from a week ago and a 485% jump from a year ago. The composite index of eight major routes rose 2% to $6,257 from a week earlier and was 293% higher than a year ago, Drewry said. Both were the highest in records going back to 2011.

In the U.S. and elsewhere, many shippers of cargo have had to pay in excess of $10,000 per container in this year’s tight spot market for seaborne freight, where deals with ocean carriers include hefty surcharges to ensure on-time delivery or guaranteed loading.

Container rates are surging because demand is outstripping the availability of the 20- and 40-foot steel boxes that carry the lion’s share of global trade. Amid strong consumer purchases and company restocking, disruptions ranging from the Suez Canal blockage in late March to port congestion are causing delays and higher costs for shippers while ocean carriers enjoy soaring profits.

Earlier on Thursday, Michael O’Sullivan, the CEO of New Jersey-based clothing retailer Burlington Stores Inc., said “expense headwinds in supply chain and freight have continued to deteriorate, and these are likely to weigh on our operating margin throughout the balance of the year.”

Meanwhile, shares of A.P. Moller-Maersk A/S, the world’s No. 1 container liner, hit a record high earlier this week. ZIM Integrated Shipping Services Ltd., an Israeli carrier that went public in late January, traded this month at more than triple its IPO price of $15 a share.

High ocean-freight rates have helped spur a surge in orders for new container ships during the first five months of this year, according to industry group BIMCO.