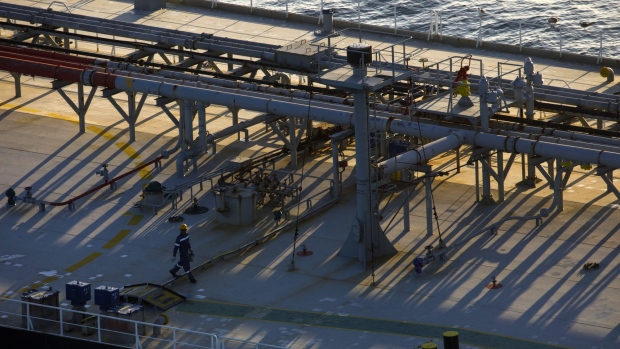 Owners who are still willing to load Russian crude are attempting to charge more for the risk. Baltic Sea-to-India rates are being discussed at about $15 million -- or $20 a barrel --- for loadings after Dec. 5 when new EU restrictions kick in, said shipbrokers. That’s a sharp increase from $9 million to $11.5 million before.

The surge in costs reflects the challenges faced by suppliers of Russian crude ahead of the deadline when the EU, including some of the world’s top tanker owners in Greece, will stop extending shipping and other services for oil produced by the OPEC+ nation. Fewer available ships and the need for Russian oil to be diverted from traditional buyers in Europe to new ones in Asia and the Middle East are also contributing to higher rates.

The exorbitant freight is in turn eroding the value of Russian crudes, such as the flagship Urals grade, at their load port as sellers ensure that the final price of delivered oil remains competitive against alternatives. Exports from the Baltic Sea, where Urals loads, rely on small to mid-size vessels such as Aframax and Suezmax tankers.

Participants in the global shipping market are also waiting for details on an oil cap proposed by the Group of Seven countries that could exempt shipments from EU sanctions as long as they trade below the price limit. Members of the 27-nation bloc are closing in on a deal to cap the price at $60 a barrel this week. Russia earlier said that it won’t sell oil and gas to nations that join the cap.

The lack of clarity surrounding exemptions is paving the way for a shift to the so-called dark fleet, or tankers held by undisclosed owners who are willing to continue handling Russian oil despite the threat of sanctions. These ships mostly comprise of older vessels and many with a track record of dealing with sanctioned regimes such as Iran.

It’s unclear if Baltic-to-India freight rates will hold at around $15 million should Urals crude fall under the price cap, nor is it clear if any bookings have been fully concluded at that level.

Meanwhile, some mid-sized tankers typically used to haul cleaner refined fuels are considering a switch to crude to tap the strengthening rates. The EU is set to roll out sanctions targeting logistical, banking and insurance services for Russian oil-product trades in February.

--With assistance from Ann Koh, Debjit Chakraborty and Alaric Nightingale.