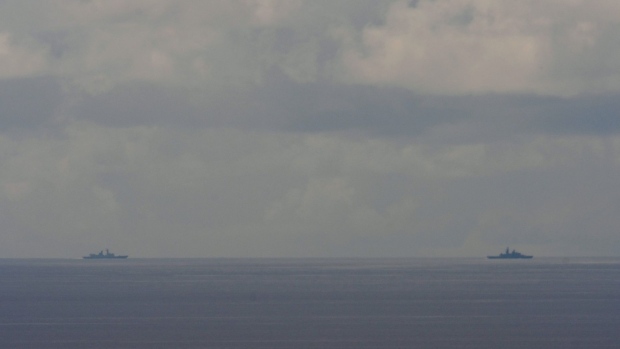 (Bloomberg) -- Shipping in the Taiwan Strait began to return to normal on Monday, though China’s announcement of a new military exercise near the island signaled that risks remain for the industry.

More than 40 vessels have transited through a China military drill zone south of Taiwan’s main port since Saturday, according to ship-tracking data compiled by Bloomberg. The latest ship positions show four of the total six zones being traversed.

Shipping in the Taiwan Strait, a key route for supply chains and commodities, has faced uncertainty and delays since Beijing began its most provocative military drills in decades in the wake of House Speaker Nancy Pelosi’s trip to Taiwan last week.

Some shipowners barred their vessels from transiting the strait, while others navigated around the drill zones. Vessels had also been hesitant about approaching the major port of Kaohsiung in southern Taiwan, seeking to avoid the large drill zone located just offshore.

The military exercises were scheduled to be completed on Sunday, but China’s military said it conducted antisubmarine and naval strike exercises in the “air and sea space near Taiwan Island” on Monday. It didn’t specify where the drill was being held or whether it was part of the exercises around Taiwan over the previous four days.

The Taiwanese Defense Ministry separately said it had detected Chinese warplanes and warships around the island Monday. But China has so far not published any new navigational warnings for live-fire exercises near Taiwan.

“Given that there have been no further notices issued for the area, shipping companies will resume their voyages through the six exercise zones, given the need for fuel efficiency,” said Ridzwan Rahmat, principal defense analyst at Janes.

Shippers on Monday said operations were progressing normally, with maritime and air travel resuming their original routes. The financial penalties for not delivering cargoes to customers on time may be too costly to avoid the strait, said shipping experts.

“The value of these cargoes is very large, so it’s no surprise that merchant ships are sailing and discharging per schedule to minimize any claims,” said Toby Copson, global head of trading and advisory at Trident LNG. “While it’s a concern, current rhetoric doesn’t justify a hard pivot to extreme measures yet. I don’t think China wants an accident either.”

The supertanker Barakah, laden with crude oil from the Middle East, was moored off Kaohsiung on Monday after last week diverting to the Sha Lung port at the northern end of the island, according to data compiled by Bloomberg. Crude tanker Ghinah is also en route to Kaohsiung after changing its route to Sha Lung.

Two liquefied natural gas vessels also arrived at ports in Taiwan on Monday after idling off the coast for a few days, according to the data.

China also publicized drills in other areas along its coast, though those were well outside the Taiwan Strait. The drills include live-weapon firing from Aug. 6-15 in the southern part of the Yellow Sea separating the mainland from the Korean Peninsula -- a frequent area for exercises.

The Maritime Safety Administration also said military exercises will take place in parts of the Bohai Sea in the north for a month from Aug. 8, and warned ships to avoid entering the area. Drills were also held in that region around this time last year.

“The Taiwan Strait is an important international shipping lane,” said Ridzwan. “On the other hand, the military drills around the Bohai and Yellow Seas do not have similar impact, as the routes that pass through these areas are mostly feeder vessel routes for Chinese ports.”

(Updates with industry comments in seventh and last paragraphs.)