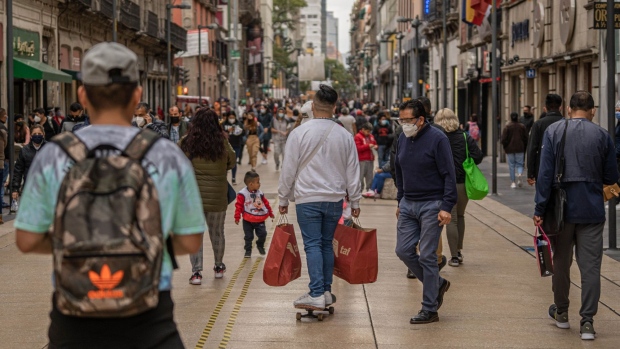 A person rides a skateboard while carrying shopping bags in Mexico City, Mexico, on Wednesday, Nov. 18, 2020. The number of confirmed cases in the coronavirus outbreak in Mexico stands at 1.02 million as of 7:30am on November 19 in Mexico City, according to data collected by Johns Hopkins University and Bloomberg News. , Bloomberg

(Bloomberg) -- Mexico’s economic activity unexpectedly contracted in August as the services sector sputtered, calling into question the strength of the nation’s recovery.

Latin America’s second-largest economy contracted 1.6% in August from the previous month, compared with analyst expectations for a 0.2% expansion. From a year ago, activity grew at a slower-than-forecast pace of 4.3%, the nation’s statistics institute reported on Monday.

“This is bad news,” central bank deputy governor Jonathan Heath wrote in a Twitter post after the data was released. “It’s primarily the result of a 2.5% decline in tertiary activities (commerce and services).”

Cases of Covid-19 in Mexico hit another high in August, before slowing in recent weeks. A 2.4% contraction in the agriculture sector also weighed on activity that month, while the industrial sector grew 0.4%.

“Services fell for a third consecutive month and accounted for most of the decline,” Felipe Hernandez, an economist at Bloomberg Economics, wrote in a research report. “Mining extended its downtrend in August, depressed by oil and gas. Output kept falling despite high commodity prices and increasing government transfers to the state-owned oil company.”

If August’s slump continues into September, Mexico may see a 1.4% contraction in the third quarter, according to Bloomberg Economics.