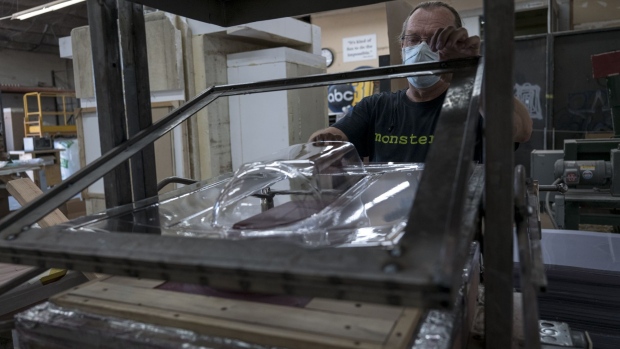 A worker wearing a protective mask, gloves, and glasses removes a piece of plastic from a mold for a face shield at Mask & Shield, a division of Monster City Studios, in Fresno, California, U.S., on Wednesday, May 27, 2020. Monster City Studios, a company that normally makes amusement park and movie props, has pivoted to manufacturing MCS face shields with forehead protection. Photographer: David Paul Morris/Bloomberg , Bloomberg

For each of the past three months, the monthly U.S. jobs report — long considered one of the most important indicators of the health of America’s economy — hasn’t mattered much at all for the US$19.2 trillion Treasuries market. The future was so uncertain because of the coronavirus pandemic, and the Federal Reserve was adding so much debt to its balance sheet, that bond traders saw little reason to test yield ranges near the lowest in history. Effectively, Treasury yields, among the purest market expressions of the economic outlook, were also stuck in lockdown.

Friday’s data was always going to be different. The U.S. yield curve steepened relentlessly this week, just about any way you slice it. Most notably, the spread between five-year notes and 30-year bonds widened on Friday to 126 basis points, a level unseen since December 2016. Even the difference between two- and five-year Treasuries started to climb after bucking the trend for weeks as traders saw little reason to think the Fed would raise interest rates anytime between now and 2025.

“The groundwork has been set for a potentially paradigm shifting session,” interest-rate strategists at BMO Capital Markets wrote on Thursday. “The only major concern from a technical perspective is that the current moves have resulted in an over-extended momentum profile.”

It turns out the momentum was just getting started.

In nothing short of a stunning report, U.S. nonfarm payrolls rose by 2.5 million in May, compared with expectations for a decline of 7.5 million, according to Labor Department data released Friday. In April, they fell by 20.7 million in the largest single-month drop in records dating back to 1939. Meanwhile, the unemployment rate fell to 13.3 per cent from 14.7 per cent — the median estimate in a Bloomberg survey called for it to jump to 19 per cent. (The Labor Department did note that the overall unemployment rate would have been about 3 percentage points higher than reported if workers who were recorded as employed but absent from work due to “other reasons” had been classified as unemployed on temporary layoff.) Even the one per cent monthly decline in average hourly earnings is probably a good sign, as it indicates more jobs for lower-paid workers that had been particularly targeted by the nationwide shutdowns. Suffice it to say, no one saw this coming.

Quantitative hedge funds might not have expected such a blockbuster report, but they’re poised to be the beneficiaries anyway. Here’s Bloomberg News’s Stephen Spratt writing about the Treasury market this week:

Funds known as Commodity Trading Advisors — synonymous with trend-following quant strategies — have likely been actively shedding large long positions in 10-year bond futures, according to market watchers. These systematic accounts tend to be secretive with their strategies, leaving a puzzle for analysts to estimate positioning.

The large volumes traded in futures after the 10-year Treasury yields broke above 0.69 per cent this week suggested an unwind of CTA long positioning, Citigroup Inc. strategists Bill O’Donnell and Ed Acton wrote in a note. CTAs have been long for all of 2020, and a break above this level could see a potential $80 billion in positions washed out, they said.

Suddenly, 10-year Treasuries at 0.69 per cent look like a distant memory. The benchmark yield rose 10 basis points on Friday, jumping from 0.86 per cent to as high as 0.96 per cent in the minutes following the jobs data. About an hour before the employment report, a circuit breaker was triggered in Ultra Bond futures.

In truth, Treasury yields in February and March fell so far, so fast, that there are huge gaps lurking across the market. As Jim Vogel at FHN Financial noted before the data, “as soon as .805 per cent was breached mid-day Thursday, traders had to withdraw support to see if buying would arrive before .90 per cent. In moderate overnight trading, buyers stayed on the sidelines.” These wide margins could make for some volatile trading ahead, especially if incoming data confirm the narrative that the U.S. economy is on track to rebound faster than expected.

It’s easy to forget, but 10-year Treasury yields at less than one per cent are historically unprecedented and signal a highly pessimistic view of the U.S economy in the decade to come. Yes, this was just one jobs report, and there will undoubtedly be many twists and turns in the great reopening of America. But it delivered a wake-up call to rates traders who have sleepwalked through the past three months. Risk assets have long been suggesting the worst economic damage is in the rear-view mirror. It’s about time Treasuries focused on the road ahead.