'The need for Shopify has never been greater': E-commerce analyst

Shopify Inc. surged on Wednesday to become Canada’s most valuable company — but can the e-commerce giant survive being No. 1?

Ottawa-based Shopify edged past Royal Bank of Canada to become the largest publicly listed company in Canada. The achievement comes with a dubious distinction however: those that leapfrogged the value of Canada’s largest bank seem destined to falter.

Royal Bank, incorporated in 1869, has been Canada’s most valuable company for years, but has been been eclipsed on a few occasions. Shopify closed with a market value of $121.3 billion, surpassing Royal Bank’s $120.5 billion.

The last company to surpass Royal Bank’s market capitalization was drugmaker Valeant Pharmaceuticals International Inc. back in July 2015. Months later, the value of the Quebec-based company plunged amid controversies over business practices, accounting and drug pricing. Valeant has since been renamed Bausch Health Companies Inc., and has new management and a different ticker symbol.

Before that, BlackBerry Ltd. — the inventor of the smartphone and then known as Research in Motion Corp. — crossed Royal Bank briefly in 2007. It held the top spot for about five months in 2008, before Apple Inc.’s iPhone and other handset makers rose up to steal its market away.

Further back, Nortel Networks Corp. became the biggest Canadian company in 2000, swelling to a market value of $366 billion and accounting for as much as 35 per cent of Canada’s benchmark index, before crashing in the tech wreck. The telecommunications-equipment maker ultimately filed for bankruptcy in 2009 and was liquidated.

The dramatic collapse of two Canadian tech giants in a country more known for being hewers of wood and drawers of water has hung over the country’s corporate psyche for years. So Shopify’s rise has been cheered on by many.

“I think it’s obvious in hindsight the leadership of both those companies got disconnected from their underlying markets,” said Eric Jackson, founder of a Toronto-based tech-focused hedge fund EMJ Capital Ltd., referring to BlackBerry and Nortel.

Jackson believes Shopify “should be held up as a poster child for what Canada should be trying to encourage in it’s tech sector because it’s been remarkable what they’ve done,” he said. Jackson had owned the company’s stock but doesn’t currently have a position. 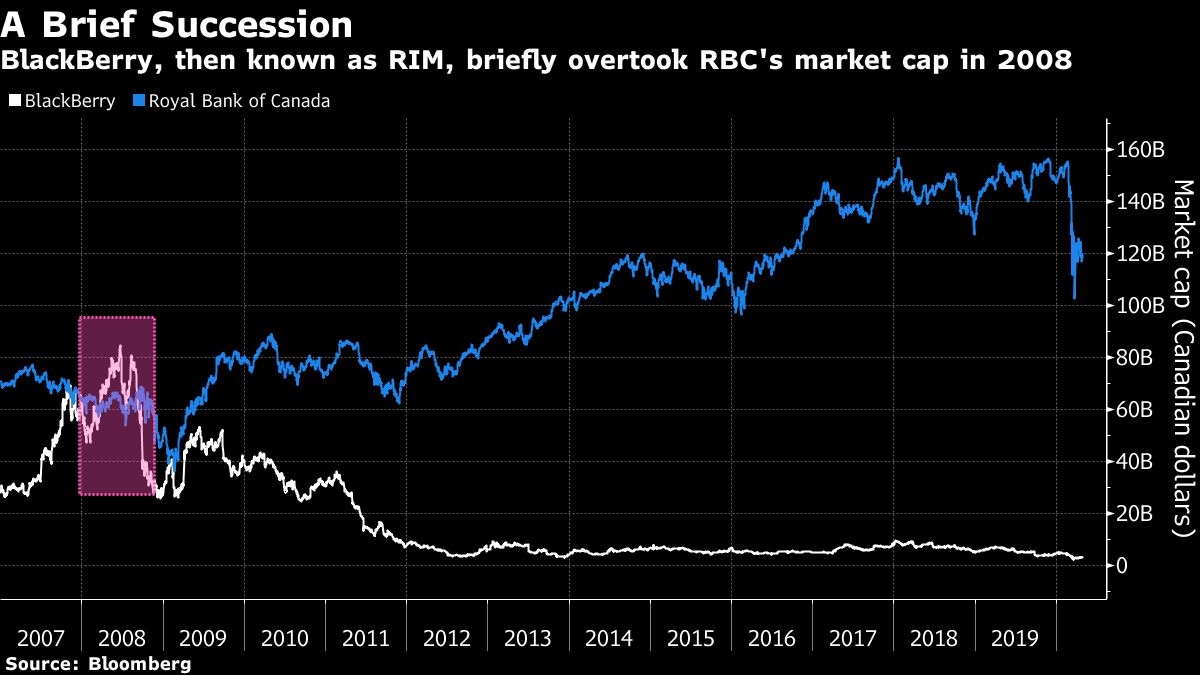 This year’s rally, which has seen the stock double, has drawn its doubters.

“On just about any valuation metric, this is one of the most expensive stocks in Techland,” Mark Mahaney, an analyst at RBC Capital Markets in San Francisco told clients in a note Wednesday. Shopify also holds the highest sales multiple, though has the largest sales growth outlook, RBC added. The bank rates Shopify with the equivalent of a buy.

The rally has made founder and chief executive officer Tobi Lutke, Canada’s fourth-richest person, according to the Bloomberg Billionaires Index. The 39-year-old has added US$2.5 billion to his wealth this year, and is now worth US$5.9 billion. The billionaire has about seven per cent of Shopify, according to its company’s 2019 proxy circular.

Lutke, a German immigrant with vivid blue eyes and a penchant for tweed caps, began building software to launch an online snowboard store in 2004. It became obvious that the software was more valuable than the snowboards, according to his website profile, and he went on to launch the Shopify platform in 2006. RBC was incorporated in 1869.

Shopify sells tools to help companies set up an online, a business model seen flourishing during the coronavirus pandemic that has shuttered bricks and mortar stores. In April, the company’s chief technology officer tweeted Shopify was handling “Black Friday-level traffic every day” to bring thousands of businesses online.

At Bloomberg’s Sooner Than You Think conference in New York last year, Lutke said Shopify isn’t competing with Amazon.com Inc. but helping other people do so.

“They’ve obviously become the anti-Amazon, they’re all about empowering everybody else except Amazon on the online e-commerce world to be successful and they’ve expanded and expanded their suite of services,” Jackson said.

He believes Shopify has the opportunity to keep rising and have a market value of several hundreds of billions of dollars in the years ahead.

“They are still just getting going. People who complain they are ‘too expensive’ don’t understand how much revenue and profits they’ll drive in the years ahead,” Jackson said.