Shopify Inc. will open up its e-commerce checkout system to all retailers selling through Google and Facebook Inc., expanding an existing collaboration with the two U.S. giants and marking the first time the Canadian technology company has offered a product to merchants that don’t use its platform.

Retailers who sell products through Facebook or Google properties such as Instagram, YouTube or Google Maps will be able to offer shoppers the chance to pay for their purchase using Shop Pay, starting in July for Facebook and later in 2021 for Alphabet Inc.’s Google. Shop Pay is a checkout product that stores users’ information, speeding up online transactions. Right now, retailers have access to it through those social media platforms, but they must be Shopify merchants to use it.

“Our hope is that this momentum moment for Shop Pay is a step forward to becoming the internet’s preferred checkout, full stop,” Shopify President Harley Finkelstein said.

From its early days helping retailers set up websites to shift their stores online, Ottawa-based Shopify has expanded to offer a suite of products, including shipping, data analytics and small business loans, and now describes itself as a “retail operating system.”

Small companies pay a monthly fee to use its core e-commerce software; larger enterprises may pay thousands of dollars a month based on sales volume, a model that has proved a huge success for shareholders. 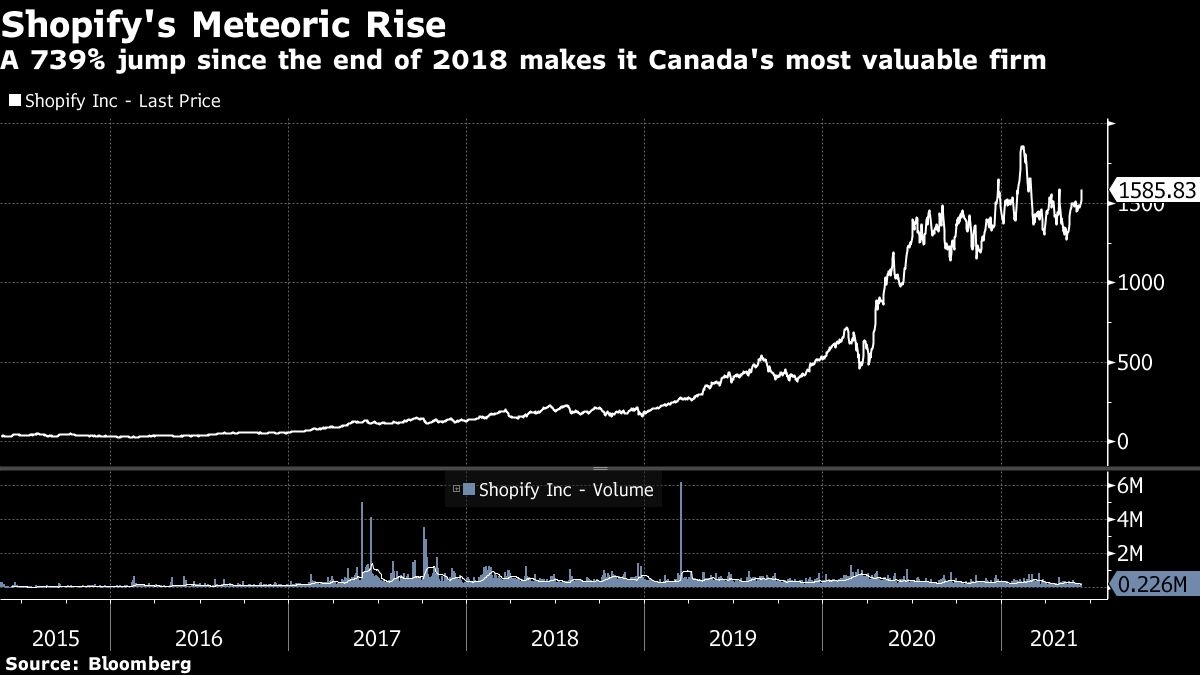 Shopify declined to provide details about what, if any, revenue will flow between the three companies as part of the arrangement, which will be announced later today. More than 1 million merchants sell on Facebook and Google platforms, it said; each day more than 1.8 billion people log on to Facebook and a billion shopping sessions take place across Google.

Shopify sees little risk that opening up Shop Pay will cause some retailers to cut their ties to the company in favor of doing all business through Google or Facebook -- “just the opposite, in fact,” Finkelstein said. Shopify is convinced that e-commerce merchants will want to maintain bespoke websites at the core of their businesses. But many of them will opt to sell across multiple platforms, including social media, and that increased complexity should make Shopify’s system even more valuable, he said.

Global e-commerce has surged during the pandemic; market research firm eMarketer estimates online retail sales will be worth US$4.89 trillion in 2021. In the U.S., almost 10 per cent of e-commerce is done through Shopify merchants, Finkelstein said.

Shop Pay is the fastest checkout system in the world with the best conversion rate -- meaning fewer online carts are abandoned by frustrated consumers, said Carl Rivera, vice president of product for the company. “You just put in your email address, you get an SMS and you’re done.” Tracking packages is easy and all deliveries are made carbon neutral with offsets, he added.

Whether Shopify will open up other products from its suite of subscription offerings remains to be seen, Finkelstein said but there are no immediate plans. Shareholders have proven they support the company’s core mandate, which is to focus on building a 100-year company and making commerce better for everyone, he said.

”We don’t necessarily monetize everything we possibly can. There are things that we could charge more for,” he said. “We much prefer to be the most important piece of software these merchants use, and then we figure out how to share in the upside.”