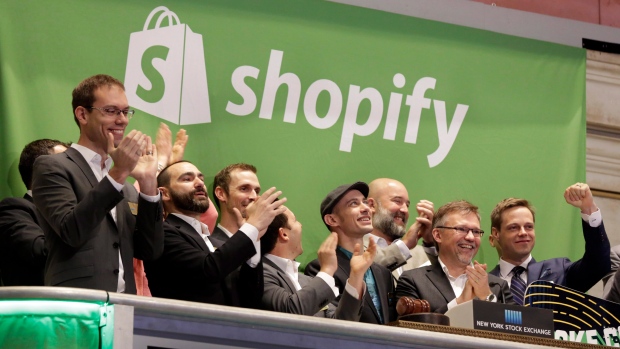 One year after Shopify Inc.’s stock market debut, its chief financial officer says the e-commerce firm is focused on making strategic investments while its “self-confidence as a company has increased.”

“Right now, from the market side and also competitively, we’ve never been better placed as a company,” said Russ Jones in an interview with BNN.

Since raising US$131 million in its IPO in May last year, Shopify has introduced a number of new initiatives and partnerships.

In September, Amazon.com Inc announced it was shuttering its e-commerce software arm, Amazon Webstores, and advised merchants to migrate their stores to Shopify instead. As part of the deal, Shopify retailers will be able to utilize Amazon’s payments technology and fulfillment services.

“Amazon had a competing product that came to the end of its life and we became their preferred migration partner,” Jones said. “They could have chose any platform out there, and they selected Shopify.”

In March, the company held its first-ever partner and developer conference in San Francisco, where it announced new product developments and details about the future of its e-commerce platform.

This may just be the start of bigger things to come for Shopify, according to one analyst.

“While we recognize that recent initiatives (mobile/social channels, shipping, etc.) are clearly bearing fruit, we believe they remain in the very early innings of monetization and could provide another meaningful leg of growth over the next several years,” Credit Suisse’s Michael Nemeroff wrote in a note earlier this month.

Shopify shares were trading at about US$28 on the New York Stock Exchange on Wednesday afternoon. That’s an increase of nearly 65 per cent from its IPO price of US$17 a year ago.

Shopify provides e-commerce solutions to more than 275,000 merchants in 150 countries, from small- and medium-sized businesses to big brands including Tesla Motors, Budweiser, the New York Stock Exchange and the Los Angeles Lakers.

The company has more than 1,200 employees working at offices in Ottawa, Toronto, Montreal and Waterloo, Ont.