We are rebalancing from being a pandemic success story to supporting offline retail: Shopify president

Shopify Inc. shares plunged below their pre-pandemic level after the company missed revenue and profit estimates, prompting some analysts to dramatically change their outlook on the Canadian e-commerce company.

Shopify fell 14.7 per cent to US$413.64 in New York, bringing this year’s decline to 70 per cent. The stock is now 2 per cent below where it closed on the day in March 2020 that the World Health Organization called COVID-19 a global pandemic.

COVID lockdowns triggered a rally in e-commerce shares as businesses moved to sell goods online, pushing Shopify’s market capitalization as high as US$212 billion and making it Canada’s most valuable company. 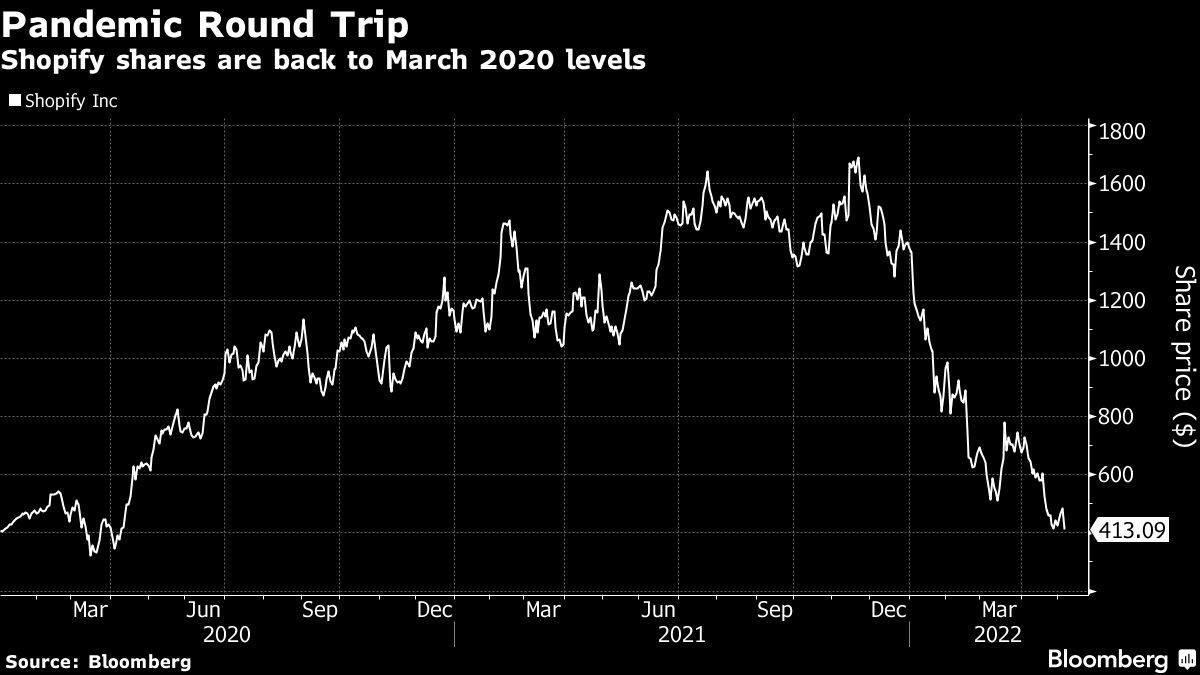 E-commerce stocks have been pummeled this earnings season on concerns that online shopping is slowing as the COVID-19 pandemic fades. Amazon.com Inc. suffered the biggest one-day drop since July 2006 after it reported a weaker-than-expected revenue forecast. Wayfair, Etsy and EBay all dropped on Thursday.

Ottawa-based Shopify earned 20 cents per share on an adjusted basis in the first quarter, far short of analyst calls for 64 cents. The company gave a weaker outlook for adding new business customers in 2022, saying growth in merchants on its platform would be “comparable” to 2021.

Shopify also announced the largest acquisition in its history, a US$2.1 billion deal for delivery startup Deliverr Inc. But it gave few financial specifics about the year ahead.

“Investors we speak with are increasingly frustrated with limited/cryptic guidance, reduced disclosure and, in the current environment, ramping spend ahead of a possible recession,” said Barclays analyst Trevor Young, who lowered his share-price target to US$460 from US$900. “We don’t disagree, and although credit is due for everything they’ve built thus far, SHOP is now a ‘show me’ story.”

Revenue rose 22 per cent to US$1.2 billion from a year earlier, but couldn’t match analyst expectations of US$1.25 billion, according to data compiled by Bloomberg.

Gross merchandise volume, the value of merchant sales flowing through Shopify’s platform, grew 16 per cent in the first quarter from a year earlier to US$43.2 billion. Analysts, on average, expected US$46.5 billion in GMV.

“We saw lower merchant adds than last year and we largely attribute that to a very tight and transitional labor market,” Shapero told analysts. “We expect that the labor market will start to ease.”

At least seven analysts ratcheted down their share price targets on Shopify by Thursday afternoon, adding to a series of target cuts in the weeks before the earnings release.

Shopify reached a deal to acquire Deliverr to expand in fulfillment services, confirming an April 20 report by Bloomberg News. In January, Shopify canceled several fulfillment and warehouse contracts intended to create its own distribution network.

The purchase of Deliverr -- which provides two-day delivery services for companies including Amazon, EBay, Etsy, and Walmart -- more than doubles the size of Shopify’s fulfillment team. The transaction will be financed using 80 per cent cash and 20 per cent Shopify Class A shares.

The deal marks the beginning of one of Shopify’s most important long-term initiatives, according to KeyBanc Capital Markets analyst Josh Beck. To build its own fulfillment network, Shopify needs an experienced team with established technology, which it gains with Deliverr. But the process is expensive and takes up time and resources, he added

“With the way the stock is trading, investors are focused on the extra dilution associated with the Deliverr deal,” Beck said in an interview. “In this market environment, that message of less near-term profitability and more investment is not well-received, particularly by short-term investors.”

In a bid to draw retail investors, Shopify announced in April plans to split its stock 10-for-1. The company is also seeking to make governance changes that would give Chief Executive Officer Tobi Lutke a “founder share” that will preserve his voting power as long as he’s at the company, under certain conditions.

When asked why shareholders should vote in favor of the plan, Lutke pointed out that his voting power will be capped at 40 per cent and he’ll be forbidden from passing on the special share to his family.

“Shareholders can get some assurance that this is a structure that supports the founder-led-ness of the company,” Lutke said.

On the conference call, the CEO was asked about the company’s ability to attract and retain talent, given the collapse in the share price. Lutke said employees and investors want to be associated with companies based on their values, adding that stock performance plays a small part.