Shopify Inc. is in a stratosphere that only one other Canadian company has reached before, passing US$200 billion in stock market value last week. It’s a sign of the market’s upbeat view of its prospects -- even as its growth rate begins to soften.

Shopify’s adjusted earnings are expected to slip to 98 cents a share in the second quarter, down 7 per cent from the same period last year, according to analysts surveyed by Bloomberg.

Revenue is forecast to break the US$1 billion mark for the first time, rising 47 per cent from the same period last year. But that’s still slower than the 86 per cent full-year growth rate of 2020.

However, the company has a habit of beating analysts’ estimates -- every quarter since it went public, in fact. And the recent surge of coronavirus cases connected to the delta variant is causing some investors to seek out stocks that do well in a lockdown, which is one reason Shopify is up 7 per cent this month after an 18 per cent rise in June. 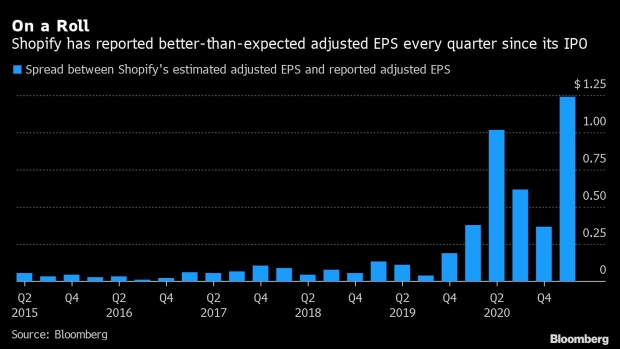 “As the world reopens and consumer demand stays online, we believe merchants will only become more emboldened to improve online and omnichannel services,” Ygal Arounian, an analyst at Wedbush Securities Inc., wrote in a July 23 note to investors. “On top of which, the resurgence of the new Delta variant can keep shopping online for longer, and be another positive tailwind for ecommerce.”

The company’s growth accelerated with the onset of COVID-19, as retailers turned to it for sales software, online storefronts, help with marketing and shipping goods and even loans to deal with a massive shift to online buying. The outlook remains strong, Anurag Rana, senior industry analyst with Bloomberg Intelligence, wrote.

While smaller merchants are still seen as the main driver of growth over the next 12 months, adoption by large retailers will become increasingly important, according to Rana.

“Though tougher comparisons compared with 2Q20 will make its growth rates look weaker, we believe the new-merchant additions could provide a good base for robust gains in 2022. Shopify makes close to 90 per cent of its revenue from North America and Europe, which are both highly vaccinated regions and are experiencing a strong economic recovery, including new employment.”

Shopify President Harley Finkelstein has also stressed that any pullback in growth may be countered, longer-term, by what the company believes is a permanent shift to e-commerce.

Shopify touched a record of US$1,650 in New York trading on July 23 as analysts raised share price targets ahead of Wednesday’s earnings. The only Canadian company to surpass a market capitalization of US$200 billion before was Nortel Networks Corp., which went bankrupt in 2009.

Roth Capital Partners is modeling for Shopify’s gross merchandise volume -- the broadest measure of sales activity flowing through merchants on its platform -- to grow 34 per cent year-over-year but a survey of retailers suggests it could be up more than 50 per cent, analyst Darren Aftahi wrote in a July 22 note.

Shopify has expanded its relationship with other online channels this year, allowing online sellers to reach customers on a wide swath of social media platforms and opening its e-commerce checkout system to retailers selling through Google and Facebook Inc.