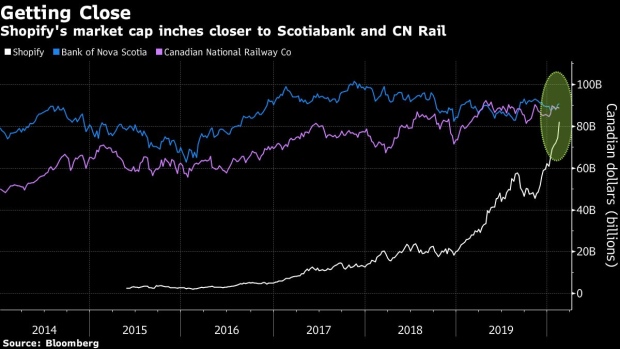 Signage is displayed outside the Shopify Inc. office in Waterloo, Ontario, Canada, on Sept. 13, 2018. Shopify Plus, the company's highest-tiered subscription, is attracting migrations from other platforms. In 2Q, more than 50% of customers that were added to the service were new to the Shopify platform. Photographer: Cole Burston/Bloomberg , Bloomberg

After surging annually since its 2015 initial public offering, it has rallied 36% to a market value of almost C$82 billion ($62 billion) in 2020, making it the seventh largest company on the S&P/TSX Composite Index. That puts it about C$8 billion away from usurping Bank of Nova Scotia -- the fifth biggest company. Canadian National Railway Co. -- is No. 6 on the benchmark.

Shopify’s value has climbed about C$7.9 billion just this week as fourth-quarter revenue topped analysts’ estimates and the provider of online shopping tools gave an optimistic forecast for the year.

Shares of Shopify have skyrocketed to fresh records amid a dearth of quality tech companies on the S&P/TSX Composite Index. The benchmark tech gauge has a mere 10 members compared with over 71 on the S&P 500’s tech index, which includes FAANG giants such as Facebook Inc., Amazon.com Inc., Apple Inc., Netflix Inc. and Google parent Alphabet Inc.

Still, Shopify’s meteoric rise has some analysts calling for caution. Credit Suisse analyst Brad Zelnick downgraded the stock to the equivalent of a hold on its “lofty valuation” but raised his share price target for the U.S.-listed stock to $575 from $450. He did, however, contend that company has a “great business.” The stock is currently sitting at about $527.

Prime Minister Justin Trudeau said the government will do everything it can to resolve protests that have crippled parts of the country’s railways, leading to disruptions in passenger travel and the shipment of key goods. RBC Capital Markets said the demonstrations are another reason the Bank of Canada will be “biased to ease.”

Get the latest news on the pipeline protests here

A new survey showed that Canadians are growing increasingly confident of getting a job with better pay were they to leave their current workplace, another indication of the health of the nation’s labor market as the unemployment rate sits at historic lows and wages climb near the fastest pace since the recession.

The housing market in major Canadian cities continued to tighten as home sales fell and prices rose in January. A combination of steady population growth, low unemployment and cheap borrowing costs have brought buyers into the market but shrinking supply is damping transactions and driving bids for homes higher in places like Toronto.

Up next, economists will be watching manufacturing sales figures on Feb. 18, inflation data due Feb. 19 and retail sales expected on Feb. 21. The stock market is closed on Monday for a holiday in Ontario and some other provinces.

1. Former Mississauga Mayor Hazel McCallion, also known as “Hurricane Hazel” turned 99 with NHL’s Maple Leafs team celebrating her birthday. She was in office for 12 terms before stepping back in 2014.

2. An extreme cold warning alert was issued for the city of Toronto Friday as temperatures dip below 30 degrees Celsius (that’s -22 degrees Farenheit).