Shopify Inc. rallied to one of its biggest gains of the year despite releasing disappointing earnings and a weak profit outlook for the rest of 2022.

The shares rose 11.7 per cent to US$35.24 in New York, riding a surge in technology stocks. While the Shopify’s second quarter results missed forecasts, the stock jumped after executives gave more detail on plans to cut expenses and improve services for small-business customers.

The company’s riskiest bet is its move to build its own distribution network to help its merchant customers, Chief Executive Officer Tobi Lutke said during a conference call with analysts. Making bold bets is something “our company especially is defined by -- not following some kind of orthodox playbook,” he said. 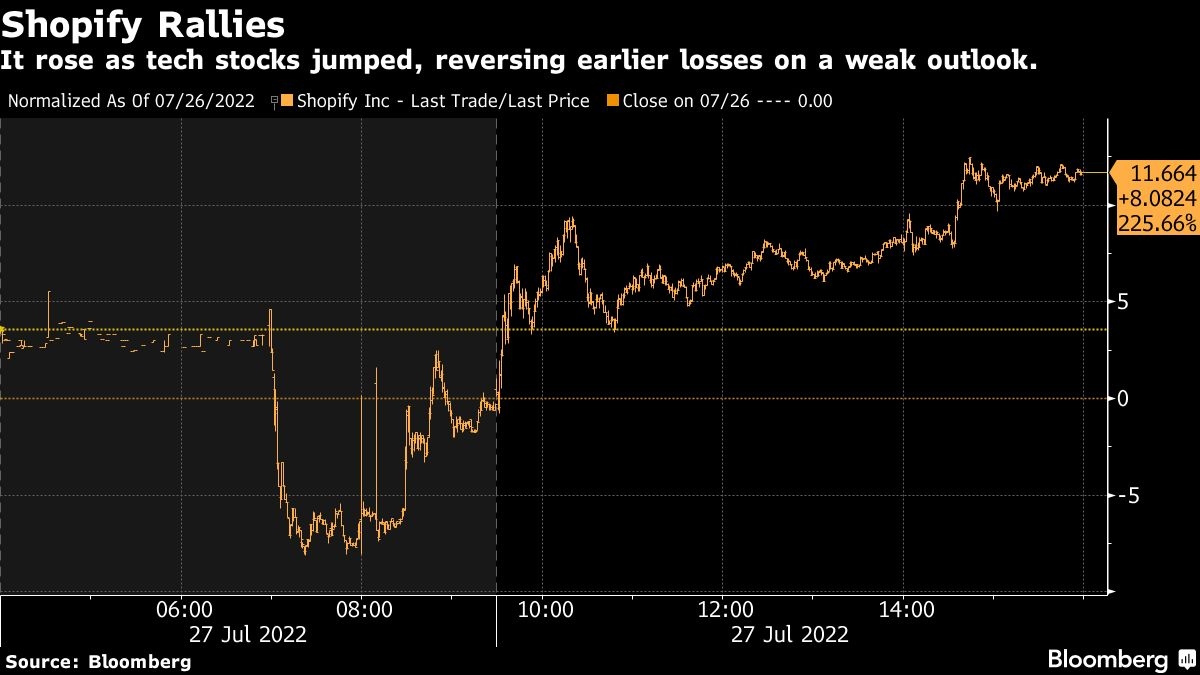 Ottawa-based Shopify posted a loss of 3 cents per share on an adjusted basis in the second quarter, falling short of estimates for a profit of 3 cents, according to data compiled by Bloomberg. Revenue rose 16 per cent to US$1.3 billion from a year earlier, broadly in line with expectations of US$1.33 billion.

The worse-than-expected results came one day after Shopify said it would cut 10 per cent of its workforce, after it wagered on a hiring spree to meet pandemic-driven demand from businesses moving their sales online. On Wednesday, the company warned of higher operating losses in the second half of the year and said inflation was beginning to hurt the sector.

“We now expect 2022 will end up being different, more of a transition year, in which e-commerce has largely reset to the pre-COVID trend line and is now pressured by persistent high inflation,” the Ottawa-based company said.

While Shopify’s move to providing payments services in physical stores could help the company weather an e-commerce slowdown, investors should brace for weakness beyond 2022 as macroeconomic concerns mount, according to DA Davidson analyst Tom Forte.

“There’s tremendous uncertainty on what e-commerce revenue looks like the next 18 months,” Forte said in an interview. “We’re in the midst of a multiyear elevated inflationary environment, so I expect the same pressure on discretionary spend next year as well.”

Gross merchandise volume -- the value of merchant sales flowing through Shopify’s platform -- grew 11 per cent to US$46.9 billion during the quarter, missing estimates of US$48.6 billion.

The shift out of pandemic lockdowns, elevated inflation and the threat of a recession have shifted consumer habits. Retail stocks fell earlier this week after Walmart Inc. made a surprise cut to its profit outlook as surging prices cause consumers to spurn bigger-ticket purchases.