Clean electricity can take us deep into the decarbonized the global economy. Electrifying transport can take things even further, followed by new lower-emission industrial processes. But if we want to have net-zero carbon emissions, we’ll almost certainly need to remove carbon from the atmosphere in measurable, verifiable, massively scaled ways.

That will be hard, expensive work. But already two companies are pulling away from the field on implementing novel ways to remove carbon. They’re not the industrial or petrochemical or engineering behemoths you might expect—one is on a mission “to increase the GDP of the Internet,” and the other began as an online snowboard shop. 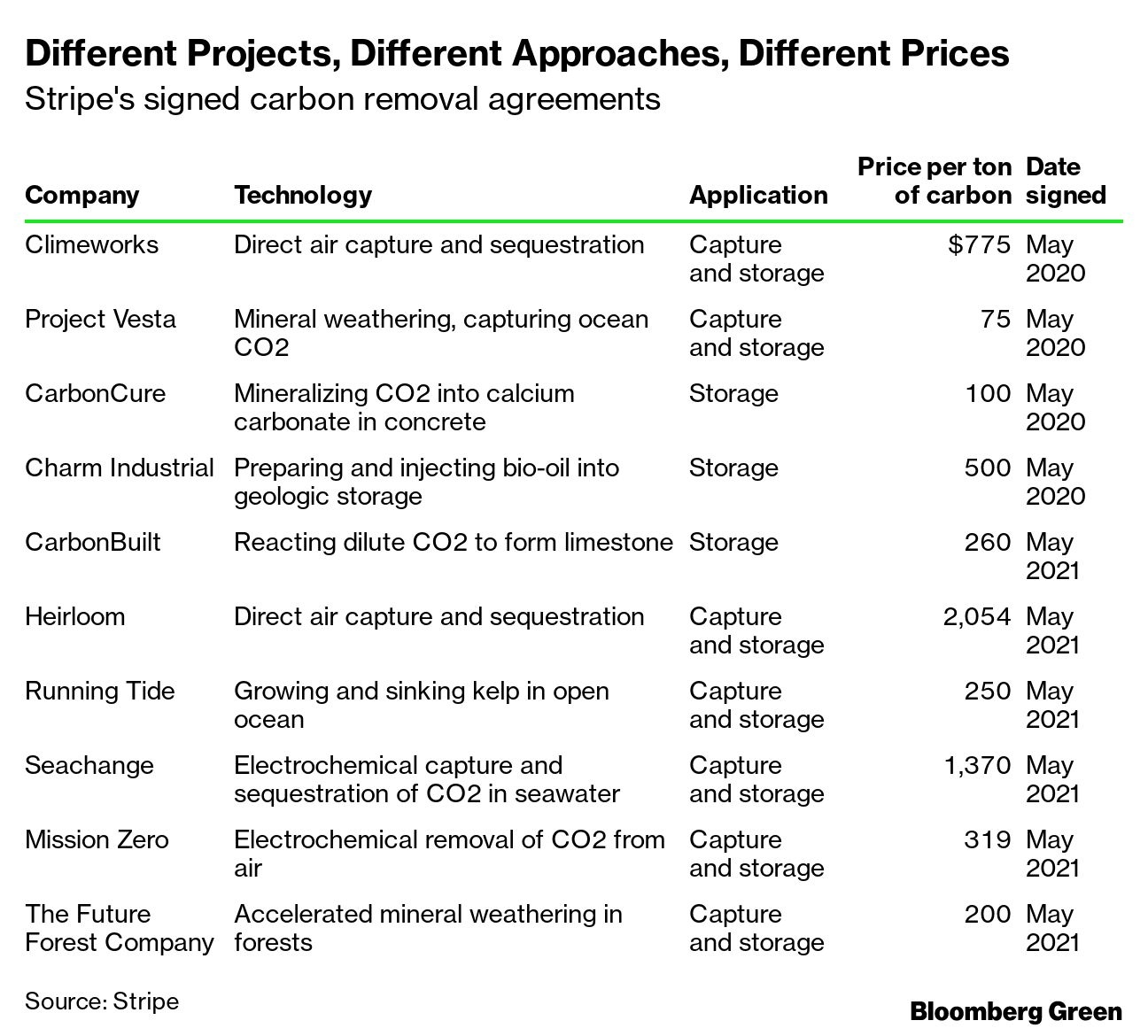 Stripe is treating these 10 projects as experiments, essentially, elaborating its reasons for selecting each one and publishing the prices it’s paying per ton of removed carbon. In some cases the company even includes the volumes removed—it’s showing its work, so to speak. Stripe also open-sourced its own materials, including the applications for funding and the criteria used to select projects by the 13 scientists on its review panel.

Online storefront Shopify Inc., meanwhile, has committed US$5 million annually to carbon removal and just published its playbook to “kick-start the carbon removal market.” The document details its strategy down to the technological approaches it favors and the stages of commercial readiness it will support.

Nature-based solutions, which capture atmospheric carbon dioxide and store it in plant matter, are more than two-thirds of Shopify’s contract carbon removal on a tonnage basis. Its “product” (e.g. converting carbon dioxide into cement) and direct-air capture commitments are a relatively small percentage of its total tonnage. 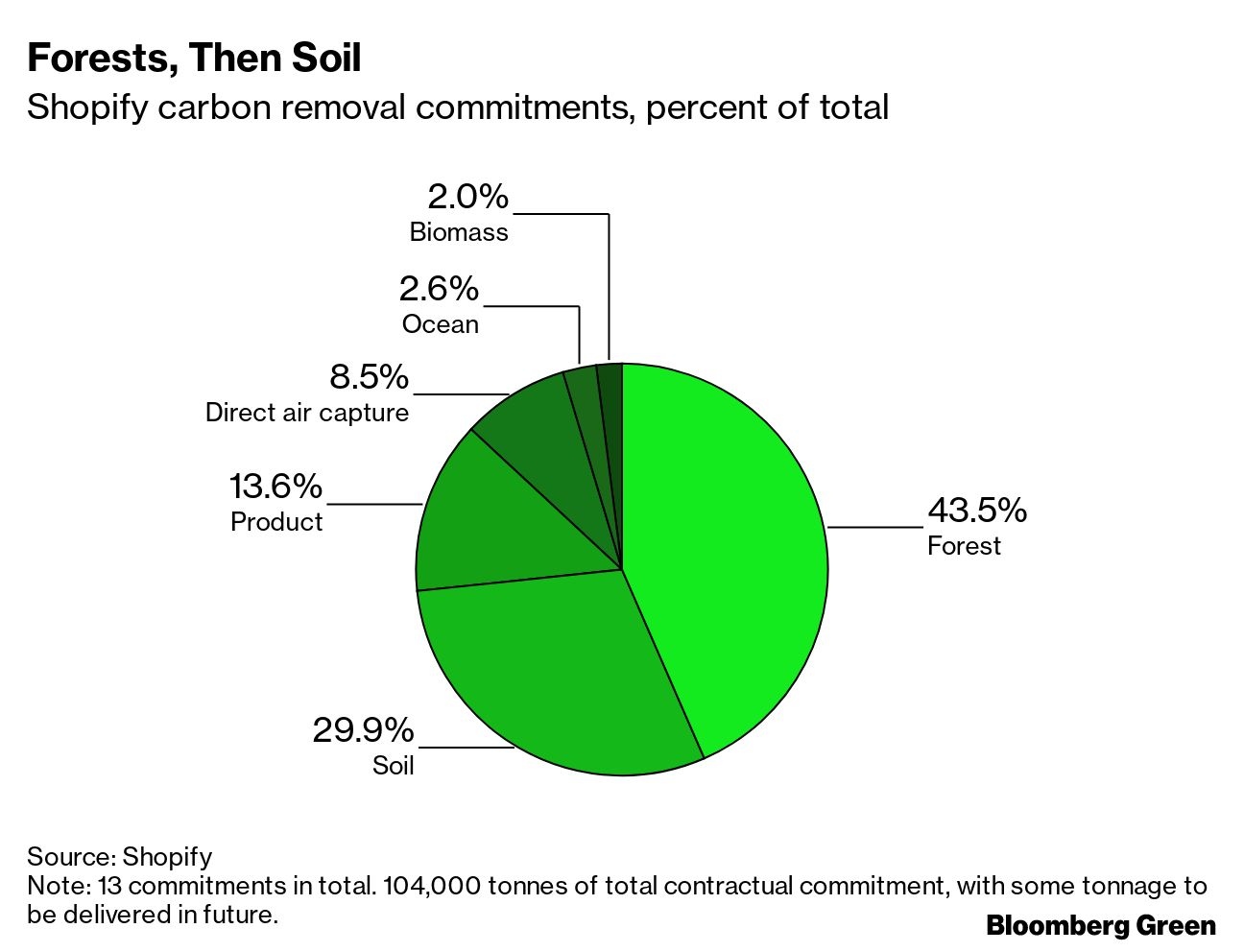 If you had asked a roomful of energy analysts and strategists five years ago what companies would have the most visible and measurable approaches to carbon removal technology right now, the answers would all have been in the energy and utilities space. Nobody would have picked the two companies that power much of e-commerce.

That seeming unlikeliness, though, is why Shopify’s and Stripe’s commitments are so important. Neither of these companies is an industrial business with emissions baked into its business model. These two companies don’t create or move molecules, own much in the way of property, plants and equipment devoted to carbon cycles, nor run a balance sheet full of carbon-intensive assets. They don’t report quarterly earnings dependent on making emissions. The two e-commerce companies can be guided by data—and only data—on the possibilities for carbon removal.

And they’re really showing their work. It’s hard to find this level of transparency on early-stage climate-focused technology, particularly when housed within big companies. That’s not necessarily because big companies don’t want to publish data, but rather because they don’t have to—projects of this scale aren’t materially significant for companies with tens of billions in annual revenue.

Finally, the two e-commerce companies deliberately and publicly taking the lead on technology that’s out of the money today. There’s no obfuscation of prices or volumes for carbon removal approaches. There’s only a commitment to try things out, see what works and hopefully build a market.

Carbon removal will also need help from the market. In particular, it will require a much larger and much more streamlined carbon-offsets market, as Bloomberg Green’s Akshat Rathi and Jess Shankleman explored earlier this week. There are all kinds of hard-to-anticipate pitfalls when markets meet carbon removal.

Of course, the approaches taken by Stripe and Shopify will surely involve applications that don’t work as planned, or don’t deliver on the promised price for removed carbon. But even subpar results are long-term positive. Every outcome allows us to learn, and every new investment gives us a chance to iterate further. Maybe these new efforts will surprise us on the upside—with better economics or faster scaling or broader application than might have been expected—in a way that helps create a large, global market for eliminating carbon.