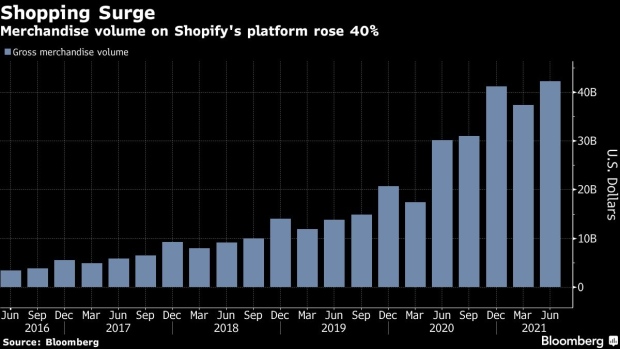 (Bloomberg) -- Shopify Inc. is on track for sales growth of more than 50% this year, even as countries slowly emerge from Covid-19 lockdowns, helped by a strategy that encourages merchant customers to sell goods across multiple channels.

The Canadian e-commerce company on Wednesday reported revenue of $1.1 billion for the second quarter, putting it on pace to top $4.4 billion for the full year, 52% higher than last year, according to analysts’ estimates. That’s despite an expected moderation in the pace of e-commerce growth as consumers return to shopping at brick-and-mortar stores.

Ottawa-based Shopify said gross merchandise volume, or GMV, grew to $42.2 billion in the second quarter, up 40% from the same period last year. The number represents the sales made by online merchants through Shopify’s platform, for which the company charges fees.

“In places that have begun to reopen, like the U.K., GMV grew faster than our overall GMV in the quarter year-over-year, indicating that online and in-store commerce are no longer mutually exclusive,” Harley Finkelstein, Shopify’s president, said during Wednesday’s call with analysts.

“Historically, most businesses were created offline and moved online. That’s no longer the case,” Finkelstein said, noting that every 28 seconds, a new entrepreneur makes their first sale on Shopify. Companies that use Shopify’s online selling software, then decide to open physical shops, are likely to use the company’s point-of-sale product when they do, he said.

“They beat on our gross margin estimates for both line items, the subscription revenue side and the merchant solutions side,” Jefferies analyst Samad Samana said following the results. “A big driver was that their operating expenses were just a lot lower than we were estimating.”

Costs were lower across the board, but the biggest dip was likely on research and development, he said.

“My educated guess is that they have pretty lofty ambitions for the number of developers they want to hire this year, and between a pandemic going on and a tighter labor market, it’s probably just taking them time to ramp headcount,” Samana said.

The so-called “take rate” -- which reflects how well the company is monetizing each dollar that runs through the Shopify platform -- expanded 1.86% over the quarter, Samana wrote in a research note following the release.