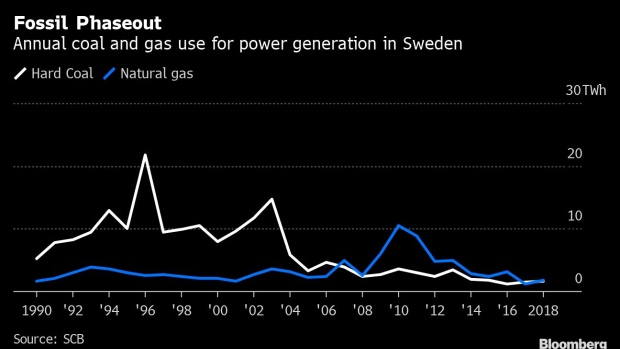 Car charging at Vala shopping center outside Helsingborg in the south of Sweden , Vala

(Bloomberg) -- One of Sweden’s biggest shopping malls could become a key player in the energy market in northern Europe.

Vala, which houses more than 200 shops and dates back four decades, is poised to along with other big electricity consumers to become increasingly important in providing grid stability at a time when the share of intermittent renewable power is rising. By reducing or increasing consumption in short bursts, the facilities will be vital in keeping the network balanced in the future.

The opportunity for everyone from server halls to charging points for electrical cars to participate as virtual power plants in these new markets have come from the unprecedented retirement of Europe’s old nuclear and coal power stations in the past few years. This year alone, Swedish grid manager Svenska Kraftnat AB will spend 2 billion kronor ($190 million) to pay flexible users for balancing, a service it used to get for free from the big plants.

Vala, outside Helsingborg in southern Sweden, is already equipped with solar panels, a reserve generator and back-up batteries that within seconds can be used when the mall is disconnected from the grid. Neither customers or tenants should be able to tell, by flick of the light or any kind of startup noise, that the reserve has been activated, said technical director Fredrik Arvidsson. A final decision to join the markets is yet to be taken, he said.

“Flexibility is no longer science fiction, it works in real-life situations,” said Edgeir Aksnes, chief executive officer of Tibber AS, a digital utility who lends capacity from its customers to the Swedish grid.

The market has also already attracted some of the regions biggest utilities. Fortum Oyj is teaming up with Bahnhof AB, an internet provider, to offer fast flexible response from one of the company’s server halls in Stockholm. And about 1,000 of Tibber’s customers in Sweden have agreed to sell back some of the capacity from when their electric vehicles are being charged if the grid needs it.

Sweden has shut down four of its oldest reactors since 2015 and several regional fossil-fuel plants have also closed. On the other hand, wind output in Sweden is expected to grow by almost 50% this year to 29 terrawatt-hours and as much as 45 terrawatt-hours in 2023. That’s about a third of the Swedish electricity demand, according the Swedish Wind Energy Association.

The closures and surge in wind power has made it harder for the network manager to maintain the right frequency in the grid and it’s offering incentives, such as smaller bid sizes, for new consumers to join the balancing markets.

“There will be an increase of both volumes and products in the coming years to ensure a robust power system, ” said Anna Jaderstrom, head of balancing markets at Svenska Kraftnat. “A lower share of conventional generation affects the stability and it is our job to make sure we have the tools to handle it.”