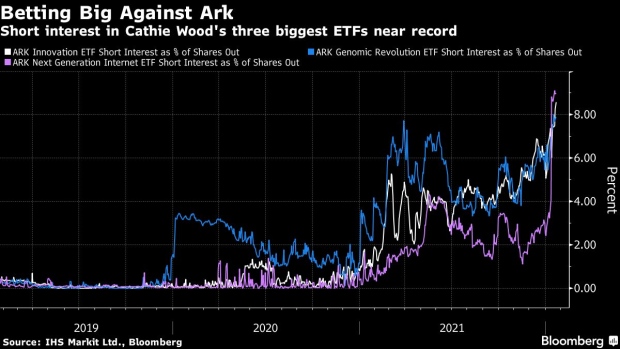 Catherine Wood, chief executive officer of ARK Investment Management LLC, speaks during the Milken Institute Global Conference in Beverly Hills, California, U.S., on Tuesday, Oct. 19, 2021. The event brings together individuals with the capital, power, and influence to change the world and connects them with those whose expertise and creativity are reinventing health, finance, technology, philanthropy, industry, and media. Photographer: Kyle Grillot/Bloomberg , Bloomberg

(Bloomberg) -- Conviction is building that losses across Cathie Wood’s fund lineup will only accelerate from here.

Short interest as a percentage of shares outstanding on the $12 billion ARK Innovation exchange-traded fund (ticker ARKK), Ark Investment Management LLC’s biggest fund, has jumped to a record 8.6%, according to data from IHS Markit Ltd. Bets against the $3.8 billion ARK Genomic Revolution ETF (ARKG) and the $2.6 billion ARK Next Generation Internet ETF (ARKW), the firm’s next largest funds, are also near records.

The surge in short interest follows a brutal stretch for Cathie Wood’s ETF complex. After rocketing to prominence in 2020, ARKK became the posterchild for speculative technology plays, Fast forward to 2022, and the ETF is now first in the firing line of the Federal Reserve’s hawkish pivot. With the central bank set to wrap up its bond buying and lift interest rates, a torrent rise in Treasury yields has slammed the richly-valued growth companies that populate Wood’s funds.

“It’s human nature to follow the old saying, ‘The bigger they are, the harder they fall,” said Matt Maley, chief market strategist for Miller Tabak + Co. “However, the shorts should be very careful over the near-term. Even the biggest declines have sharp bounces, so these funds are getting ripe for short squeezes soon.”

ARKK has plunged more than 24% so far in 2022, outpacing a 12% decline in the Invesco QQQ Trust Series 1 (QQQ), which tracks the broader technology sector. ARKG and ARKW have dropped 24% and 23% this year, respectively.

The extra 2 million shares added to those on loan for ARKK in the past week may account for recent inflows to the fund. In a process known as “create-to-lend,” new shares are generated in order for investors to borrow and sell short against the fund. That partly explains why ARKK has taken in roughly $463 million worth of inflows over the past week, according to Bloomberg data.

ARKK’s drawdown has been a boon for the Tuttle Capital Short Innovation ETF (SARK), which uses swap contracts to track the inverse performance of Wood’s flagship fund. After a low-key launch in November, SARK has rallied nearly 56% and amassed about $250 million in assets.