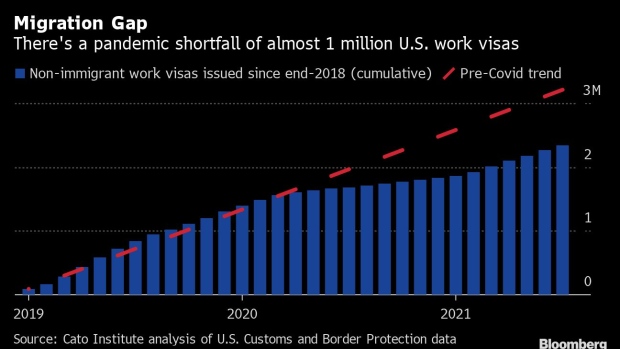 (Bloomberg) -- For years, U.S. businesses could rely on a steady flow of workers arriving from around the world on various types of visas. The pandemic has slowed that to a trickle -– making the current labor shortages even worse.

And the shortfall of migrant workers will likely persist even after U.S. borders reopen, as they’re scheduled to do next week.

The State Department issued about 850,000 non-immigrant work visas between March 2020, when Covid-19 forced borders and consulates to shut down, and July 2021, according to research by Alex Nowrasteh at the Cato Institute. That’s less than half the number in the previous 17 months.

The slowdown is having an impact across the economy, from seasonal work in agriculture to high-paying tech companies. It’s especially challenging for U.S. manufacturers, who say they’ve long struggled to fill mid-skilled positions that require some level of technical training, like machine operators or welders.The Nov. 8 border reopening will ease travel from countries like South Africa, India and Brazil, which send a lot of mid-skilled workers to the U.S. But it won’t happen overnight, said Jon Baselice, vice president for immigration policy at the U.S. Chamber of Commerce.

“It’s going to take some time for the consulates and the embassies to really get back up and running,” he said.

Manufacturers have turned to foreign labor to fill gaps left by the retirement of mid-skilled baby boomers and the shift toward automation.

“We need people that are going to help implement those automation technologies, and then service and maintain them,” said Aimee Guthat, an immigration attorney at Jackson Lewis PC. “We just don’t have the skillsets here.” The U.S. could have 2.1 million unfilled manufacturing positions by the end of the decade, costing the country’s economy more than $1 trillion, according to a May study by Deloitte and the Manufacturing Institute. Roughly one in five essential manufacturing workers was foreign-born as of 2018, according to the Center for Migration Studies. In the semiconductor and medical-equipment sectors, as well as food processing, it was closer to one in four.Unlike European countries including Germany, the U.S. doesn’t have a specific program focused on attracting mid-skilled immigrants.

Companies with international operations can transfer their existing workers via L-1 visas. Others who want to bring in mid-skilled foreign labor can petition for H-2B visa spots. The program allows for up to 88,000 seasonal workers of all skill levels -- excluding agriculture -- to come into the country each year.

But that program is “dysfunctional at best,” according to Tina Andrew, the owner of Work Abroad Network LLC.

Andrew used to connect American companies with foreign hires including machine operators and construction workers, but began focusing more on the farming sector during the pandemic. Unlike agricultural workers, many mid-skilled manufacturing workers didn’t qualify for emergency visa interviews and exceptional entry.

One of her clients had to shut down operations as a result of not getting enough H-2B workers, she said. “I’ve heard many, many stories like that.”

U.S. workers, seeking to leverage the pandemic squeeze into long-overdue wage gains, have been skeptical about boosting immigration. Major labor unions including the United Food and Commercial Workers have opposed H-2B expansion, arguing that the program displaces native workers and drives pay down.

Research by many economists -- including this year’s Nobel laureate David Card -- suggests the influx of foreign workers has little to no negative effect on the U.S. job market.

That’s also the case made by Nowrasteh, director of immigration policy at Cato, a right-leaning think tank. He argues that native workers have also suffered as a result of the border bottleneck.

“American companies had to scale back production,” Nowrasteh said, and that made them “less able to hire Americans in other parts of the production process.”

Guthat, the lawyer, says it’s a “misconception” that companies are just seeking cheap foreign labor, and points out that government fees for issuing L- and H-type work visas can be as much as $5,000.

Trade groups like the Chamber of Commerce have urged policymakers to streamline the immigration system and allow more work-based visas and green cards.

Without such reforms, bottlenecks will likely persist even after the border reopening eases things a bit, said Baselice. But he says “real, meaningful measures” would require bipartisan talks -- and those “are just not happening.”