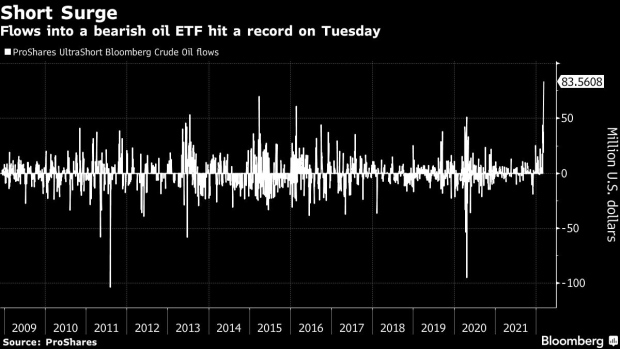 (Bloomberg) -- A small exchange-traded fund that makes leveraged bets against oil prices saw its biggest inflow on record the day before prices tanked.

The fund’s assets have ballooned to $277 million after a run of six consecutive inflows, the highest since April 2020. The fund climbed 20% Wednesday, the most since November. Crude futures have been exceptionally volatile since Russia’s invasion of Ukraine, with global markets weighing the potential for a long-term disruption to supply from one of the world’s top three producers.

Due to the way the fund settles trades, flow data for the fund -- ticker SCO -- arrives with a one-day lag.