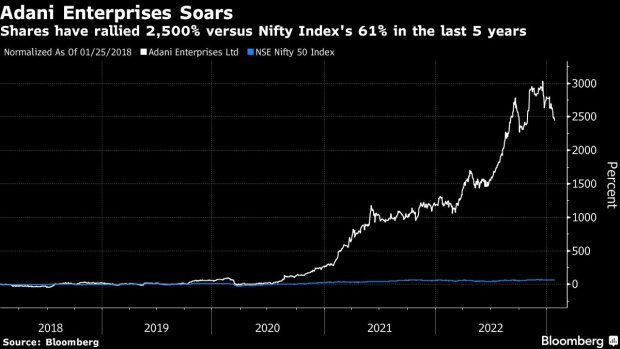 (Bloomberg) -- A short-seller report is drawing attention to the multifold gains of the Adani Group of stocks — a potential blow to the empire of Asia’s richest man and the personal wealth he has amassed.

The conglomerate’s stocks scan among the most expensive names in Asia by several measures, including the closely-watched earnings multiples and price-to-book value. That’s after the flagship company Adani Enterprises Ltd. has jumped about 2,500% in the last five years, trumping even the likes of Elon Musk’s Tesla Inc.

Hindenburg Research said it was shorting the conglomerate’s stocks, and that it sees “85% downside purely on a fundamental basis owing to sky-high valuations.” Trading at 90 times forward earnings, Adani Enterprises is the most expensive stock on India’s key NSE Nifty 50 Index.

The US short-selling firm run by Nate Anderson made wide-ranging allegations of purported corporate malpractice in an almost 100-page report on the Adani Group. That sent shares of the Indian group’s companies tumbling Wednesday. Hindenburg said it’s short Adani securities via derivatives and US-traded bonds. Adani Group rejected the accusations as “baseless” and “selective misinformation.”

Valuations of Indian stocks are exemplified by the Adani group of companies, said Kamil Dimmich, partner at North of South Capital, a London-based Emerging Market Equity Manager. He said they have no exposure to India as “valuations will have to normalize before it makes sense to re-enter the market.”

An all-out Adani show in Asia

Here are some core valuation methods where Adani Enterprises scans as expensive:

--With assistance from Selcuk Gokoluk, Ashutosh Joshi and Akshay Chinchalkar.