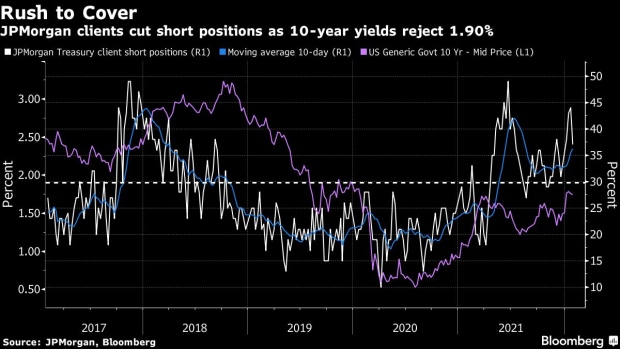 (Bloomberg) -- The Treasury market appears more likely to respond in a logical way to Wednesday’s Federal Reserve communications because of indications that the past week’s U.S. stock-market bloodbath cleared out a crowded camp of bets on higher yields.

The futures market had already offered up clear evidence of short-covering during last week’s rally, when Tuesday’s weekly survey of Treasury clients by JPMorgan Chase & Co. detected a notable shift from short back to neutral.

“The ructions in the equity market have now been enough to cleanse the once-outsized tactical short base in US rates that built during the first few weeks of this year,” Citi strategists Bill O’Donnell and Ed Acton say in a note. The strategists add that the market appears to be going into Wednesday’s Fed statement on a balanced footing “for the first time in quite a while.”

The shift occurred after the benchmark 10-year note’s yield stalled at the 1.90% level, just below a zone where large open interest in options could unleash a wave of short gamma hedging flows.

The rejection appeared to catalyze short-covering in futures. The equivalent of $13.4 million per basis point move in yield was cut from 5-year note to Ultra Bond contracts on Friday.

Robust demand at a five-year U.S. bond auction on Tuesday reflected a similar trend. The sale saw a record-low allotment to primary dealers as the share from indirect bidders rose to the highest since September 2017.

Ten-year Treasuries were little changed at 1.77% during Asia trading Wednesday, while U.S. futures volumes were light ahead of the Fed decision.

“Balanced Treasury positioning suggests that the market will take the Fed’s cue,” said Eugene Leow, rates strategist at DBS Bank Ltd. in Singapore. Still, “risks continue to tilt toward higher Treasury yields in the front-end, as investors nervy over surging U.S. inflation may continue to price in Fed rate hikes.”

The likeliest market-moving event may come from comments on a faster pace of quantitative tightening, TD Securities strategists including Jim O’Sullivan wrote in a note Tuesday. That could allow for a more gradual lifting of the funds rate, they said.

(Updates with Treasury cash and futures moves during the Asian session on Wednesday.)