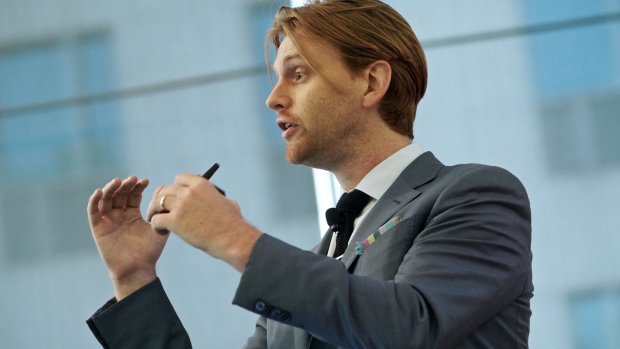 Soren Aandahl, founder and chief investment officer and founder of Blue Orca Capital LLC, speaks during the Sohn Hong Kong Conference in Hong Kong on, Wednesday, May 30, 2018. The conference brings together hedge fund managers and investment professionals to present their investment ideas. , Bloomberg

(Bloomberg) -- Activist short seller Soren Aandahl is launching his first hedge fund, with a mandate to find accounting malpractice and overvalued stocks all over the world.

The Blue Orca Global Activism Fund starts trading Monday with $25 million in assets under management, according to Aandahl, who founded Blue Orca Capital three years ago in Austin, Texas. He says he’s lining up another potential $30 million in committed capital. The fund will pursue targets globally, using a market-neutral strategy to seek profits regardless of whether global stocks are in a downturn or uptrend, said Aandahl.

Blue Orca rose to prominence in 2018 when its criticism of corporate governance at Samsonite International SA led to the resignation of the luggage maker’s chief executive officer. Aandahl’s firm has since targeted Kasen International Holdings Ltd., China Medical System Holdings Ltd., Ausnutria Dairy Corp. and Anta Sports Products Ltd. in Hong Kong, adding to his count of 37 publicly-disclosed ideas in a decade-long career as an activist short seller. Aandahl calls 17 of those “zeros,” or stocks that have lost almost all their value.

“We’re ready to publish new ideas right off the bat,” he said by phone last week. “The plan is to look for really fraudulent names, as well as ideas where we think there’s a strong accounting angle.”

Aandahl declined to say when Blue Orca will publish its next report, or which geographical location his team of three investment analysts is currently focused on. Blue Orca previously funded investments with so-called special-purpose vehicles, raising capital for a specific short idea. Blue Orca will continue to have these structures alongside the new hedge fund, Aandahl said.

Blue Orca largely secured capital from family offices -- or private wealth managers catering to one or a small number of affluent families -- and funds of funds, according to Aandahl. He said the firm’s track record in Hong Kong helped him raise funds in the Asia Pacific region at a time when he couldn’t travel to meet potential investors.

Activist short sellers have swept Hong Kong for targets in recent years, with some -- including Muddy Waters Capital founder Carson Block, who runs his own $209 million activist hedge fund -- alleging that links between equity markets in the city and China facilitate stock manipulation.

Short sellers borrow shares, sell them, and then aim to buy them back at a lower price to pocket the difference. Investment firms with large bearish positions were punished earlier this year when Redditors piled into the U.S. market’s most-shorted stocks. Andrew Left, whose firm Citron Research lost about 100% on its GameStop Corp. trade when the stock rallied in January, said he would quit publishing research on potential short sales.