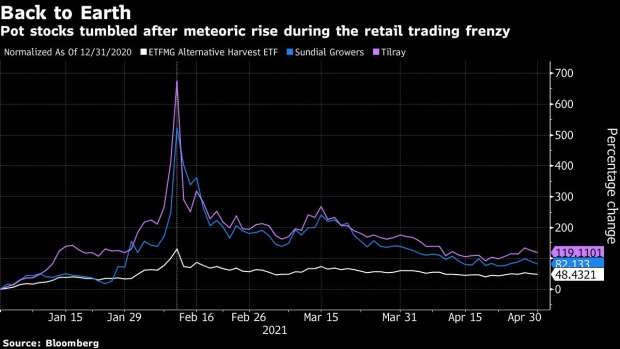 (Bloomberg) -- Short sellers are again betting cannabis stocks will fall after retail investors squeezed their positions out in the Reddit-fueled trading frenzy.

Overall short interest in the 119 U.S. and Canadian cannabis stocks tracked by S3 Partners increased by $346 million to $3.14 billion over the last 30 days, according to a report dated April 29, though that was still $288 million shy from the level when the year started. The short interest as a percentage of float has been up in almost every cannabis stock in the past month, S3 said.

About 98% of short interest in the pot sector was concentrated in 20 stocks. Aphria Inc., Canopy Growth Corp. and Aurora Cannabis Inc. were the most shorted over the last 30 days, while Aurora and Tilray Inc. ranked among the highest in total short interest as a percentage of float at 23.41% and 19.95%, respectively.

The cannabis sector rally reversed course amid the fading retail trading mania. ETFMG Alternative Harvest ETF, known by its ticker MJ, surged 131% from the start of the year to its peak on Feb. 10. From there, it has dropped more than 35%. Sundial Growers Inc., a retail favorite that shot up from below 50 cents to just shy of $3 a share in February, has fallen back under 90 cents.