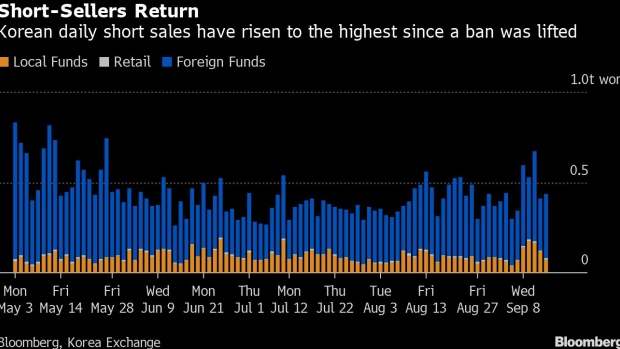 The Kakao Corp. KakaoTalk app arranged on a smart phone in Gimpo, South Korea, on Thursday, Sept. 9, 2021. Kakao and Naver Corp. plummeted, set for the biggest declines in years, after South Korean lawmakers warned the nation’s internet giants against abusing their market dominance in the pursuit of profits. , Bloomberg

(Bloomberg) -- Short-sellers have driven big losses in the favorite stocks of South Korean retail investors this month, piggybacking on a campaign by local regulators to rein in the power of Kakao Corp. and other internet giants.

Kakao, the operator of Korea’s most-used messenger app, is the most-shorted stock in September as lawmakers voiced concerns over its market dominance -- a move that has drawn comparisons with China’s crackdowns. It has plunged more than 20%, losing $14 billion in market value amid selling by institutional investors, even as it is the most-bought name by day traders.

Some other stocks that are among both the biggest shorts and the most purchased by individual investors are recently-listed internet-only lender KakaoBank Corp., game maker NCSoft Corp. and Kakao Corp.’s rival Naver Corp.

Korea’s fiercely loyal retail traders helped drive one of the world’s best stock rallies from last year’s pandemic lows, even amid Asia’s biggest exodus of foreign investors. However, the power of individuals has faded with the lifting of a 13-month ban on short-selling, and the benchmark Kospi has traded mostly sideways for the past four months.

The value of daily short sales this month touched the highest levels since a flood of bearish bets in May, when the ban imposed to curb pandemic volatility was lifted. Retail investors banded together under monikers such as “K-Stop” and “K-streetbets” remain staunchly opposed to short-selling, although their effort to make the prohibition permanent was unsuccessful.

Even with its recent tumble, Kakao’s share price is still four times the level it was at 18 months ago, having ridden a demand surge on the pandemic stay-at-home trend as well as successful listings of corporate spin-offs. Known as “the people’s stock,” it is 62.5% owned by individual investors.

Founded by billionaire Brian Kim, the firm pledged earlier this week to abandon the high-growth model that drew criticism as “a symbol of greed.” Despite such efforts, the stock continued to drop and many market watchers expect ruling party lawmakers to target the online titan and other big tech companies during a parliamentary hearing starting next month.

That could cause further volatility in their stocks, leaving retail investors in a bad spot.

“Some individuals are catching a falling knife but any meaningful recovery in the stocks seems far-fetched, and foreigners looking to profit from short-selling have increased,” said Han Jiyoung, an analyst at Kiwoom Securities Co. Hope for any GameStop Corp.-style rally may lead to disappointment, he added, as “South Korean retail investors are not as cohesive as they were before.”