Betting against pot, as companies overspent on production: Strategist

Cannabis short sellers are ratcheting down their bets that the beleaguered sector will continue its slide.

Short interest in pot stocks has tumbled to US$632 million from US$3.14 billion in May 2021, even as share prices plunged in the past year, according to data from S3 Partners. While analysts are skeptical that the federal government will approve a legal weed market soon, Congress is set to consider some cannabis legislation, which could lead to a rally in the sector.

“Cannabis short sellers were seeing the market value of their shorts decrease but were not actively replacing that short exposure,” said Ihor Dusaniwsky, managing director at S3. “Overall, the cannabis sector is not a favorite short.”

The highly volatile sector swings at the whims of lawmakers. Cannabis stocks jumped on news last week that Senate Democrats plan to introduce a bill to decriminalize marijuana, known as the Cannabis Administration and Opportunity Act.

Tilray Brands Inc. posted its best day in nearly four months, and the AdvisorShares Pure US Cannabis ETF jumped the most since February. The boost continued on Monday, with Canopy Growth Corp. jumping as much as 20 per cent, its biggest intraday jump since February 2020.

Even so, the rally barely dented the steep losses of pot stocks. The ETFMG Alternative Harvest ETF, the largest fund in the sector, spiraled 47 per cent this year. 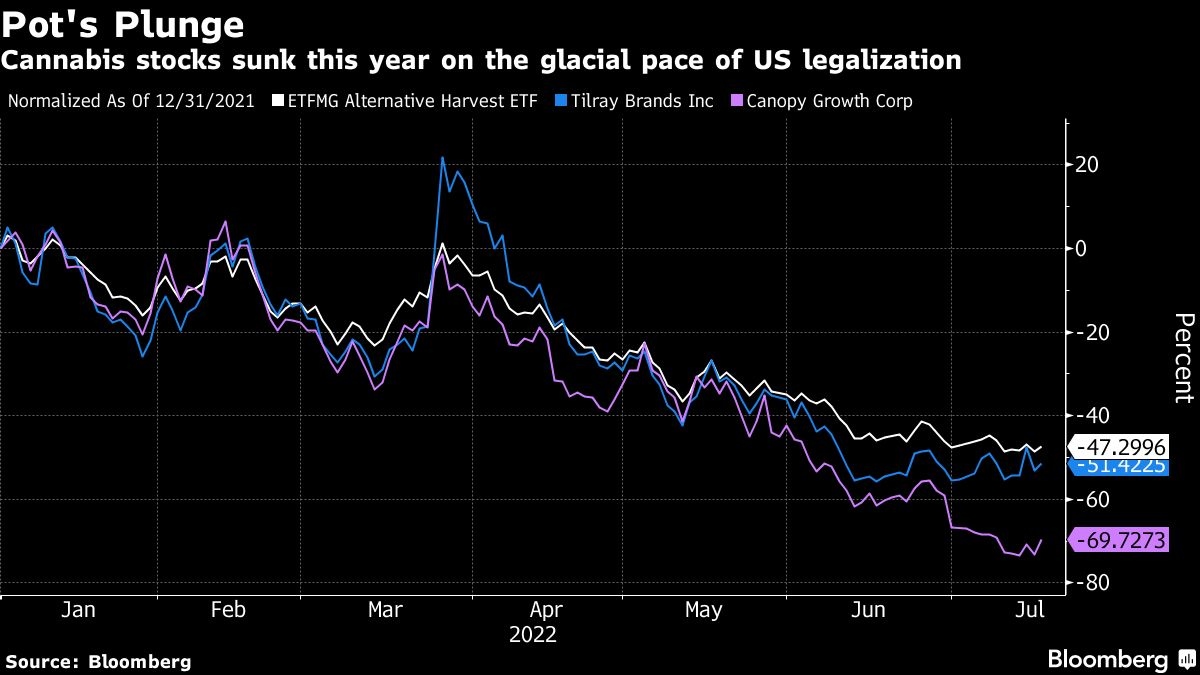 Canadian cannabis giants have floundered without access to US markets and stunted revenue in their home country, with Tilray sinking 50 per cent and Canopy plunging 70 per cent this year. The companies maintain their rankings as the top two shorts in the sector, making up 57 per cent of total short selling, according to S3.

The boost may be short-lived as analysts expect the decriminalization bill to fail since it would need 60 votes to pass in a Congress where most Republicans and some Democrats oppose it.

“With the November mid-term elections only four months away (where Democrats are likely to lose ground), we believe the prospect of such a landmark bill getting to the finish line in the current legislative session is extremely remote,” Canaccord Genuity analyst Matt Bottomley said in a note last week.

But even if the US fails to legalize cannabis this year, experts say that it will happen eventually, and that investors will be ready to flood the market when it does.

“We believe that large pools of institutional capital are still sitting on the sidelines waiting for additional clarity at the federal level prior to being able to commit capital to the sector, and although ultimate timing is still uncertain, we believe headlines continue to trend in the right direction,” Bottomley said.