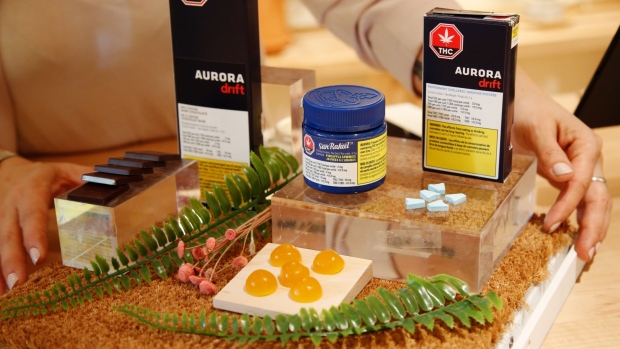 Shares of Aurora Cannabis were up as much as 88 per cent in Friday morning trading, while Tilray climbed 55 per cent and Hexo Corp. was up 38 per cent.

Andrew Carter, an associate vice-president at Stifel Financial Corp. who covers the cannabis sector, said that it appears that a so-called short squeeze was likely driving much of the pot sector's gains on Friday. A short squeeze occurs when a stock quickly moves higher and forces investors who bet against it to buy it in order to prevent further losses, which pushes the stock even higher.

"It's one of those things that catches hold of retail interest. [The short interest] can drive pretty hard," he said in an interview.

According to Bloomberg data, roughly 20 per cent of Aurora's shares are shorted by investors, while Tilray and Hexo have about 25 per cent and four per cent of their stock shorted, respectively.

A spokesperson from Tilray was not immediately available for comment. A Hexo spokesperson said they ​do not comment on the company's stock price or ​its daily moves on the market. An Aurora representative said the company does not speculate on market performance.

Graeme Kreindler, an analyst at Eight Capital, told BNN Bloomberg that some investors may be jumping into the Canadian cannabis sector believing that certain companies may be in line to enter the U.S. following this week’s election results.

However, he added that with the Senate likely to remain under Republican control, the pathway for federal legalization remains murky and could keep many Canadian cannabis producers out of the world's largest cannabis market for some time.

"It seems like Canadian stocks are focusing on the White House, while the Senate race will be impactful for determining the speed at which legislation that would potentially open up a pathway for legalization to occur," Kreindler said.

"That's something that seems to be overlooked and with that, there seem to be more complications and impracticalities of how that market entrance would work for those [licensed producers] compared to what's being reflected in the market right now."

Carter added that investors should be wary of these high-flying Canadian cannabis stocks coming back to reality given that there's no significant news to warrant such gains.

"Anytime you blindly throw money at an investment behind an idea, you need to consider what is priced in, so it's a difficult strategy to invest in things that are salient or positive themes. Canadian producers are salient because they have the broadest access to capital and it's easy to understand their connection to cannabis."​