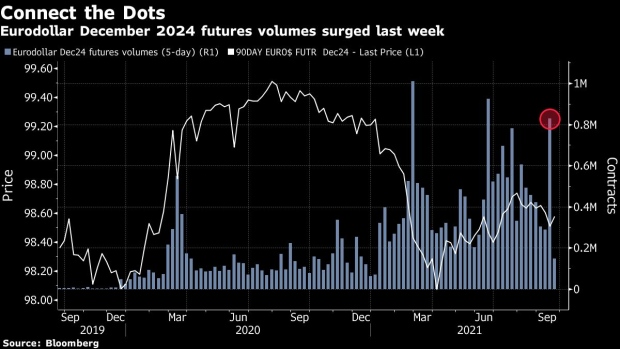 (Bloomberg) -- Bond traders with positions in short-term interest rate futures have a lot riding on Wednesday’s update to the Federal Reserve’s dot plot.

With the U.S. central bank beginning to contemplate monetary policy tightening, policy-makers’ latest forecasts for where the federal funds target will be in each of the next three years have the power to cause lucrative price swings in eurodollar futures and options. Last week’s volume in the December 2024 contract was the third highest in its history, suggesting that’s where the greatest potential rewards lie. The forecasts are set to be released along with the Fed’s monetary policy statement as part of its summary of economic projections, on Wednesday at 2 p.m. in Washington.

Big banks are marketing trades that anticipate a hawkish shift in the dots. Goldman Sachs Group Inc. and Toronto-Dominion Bank this week recommended tactical short positions in short-term interest-rate swaps, by paying 2y1y OIS in dollars. The TD version entails receiving the British pound equivalent. Morgan Stanley since June has recommended a eurodollar curve steepening trade involving the December 2024 contract, based on the disconnect it sees between the expected pace and timing of Fed rate increases. The trade has been unprofitable for the most part so far, but dot-plot revisions could change that.

Goldman says the Fed dots are more likely to move up than down; more than two hikes projected in 2024 would call into question the central bank’s inflation tolerance threshold “and push the relevant interest rate forwards higher,” strategists Praveen Korapaty and Avisha Thakkar wrote in a report. TD expects the 2024 dots to anticipate an increase of 50 to 75 basis points, compared with 40 basis points currently priced in.

Just three Fed officials need to raise their unchanged dots for 2022 for one quarter-point rate increase to be the new median for next year. The eurodollar curve already anticipates the change, based on the spread between the December 2021 and December 2022 futures. A second increase is expected by mid-2023 based on the June 2023 contract’s price.