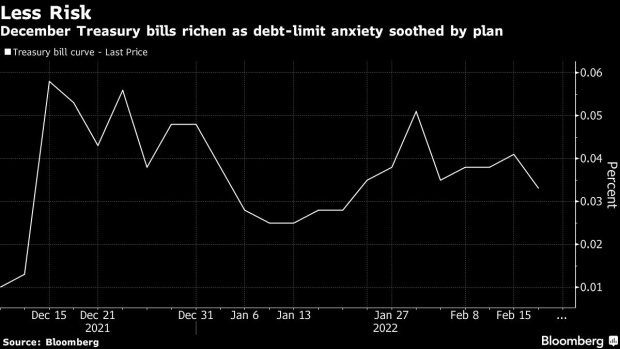 (Bloomberg) -- U.S. Treasury bills coming due this month gained after U.S. lawmakers reached a deal to raise the government’s debt ceiling, causing traders to remove the premium that had been priced in to account for the risk of a technical default.

Yields on Treasury bills maturing during the second half of December shed as much as three basis points after the announcement of the agreement to raise the debt limit by about $2 trillion. The Dec. 30 bill’s yield fell to about 0.045%.

“The bill addressing the debt ceiling is not a moment too soon since Treasury was already starting to scrape the bottom of the coffers,” said Gennadiy Goldberg, a senior U.S. rates strategist at TD Securities.

The advance of bills to lift the debt ceiling would “make investors more confident buying December 2021 bills,” she said. “However, given that Treasury will have to rebuild their cash balance from a measly $101 billion now to about $500-600 billion, we will likely see bill issuance accelerate in the near-term, which could put a bit of upward pressure on bill yields.”

The plan, which is moving through the House, would link the nominal debt ceiling increase to a bill to prevent Medicare cuts, potentially pushing the issue out until after the midterm election in November.

It marks what could be a lengthy pause in debt-limit anxiety, which has stoked volatility in the Treasury curve as traders weighed the likelihood of and potential timing for delayed payments.