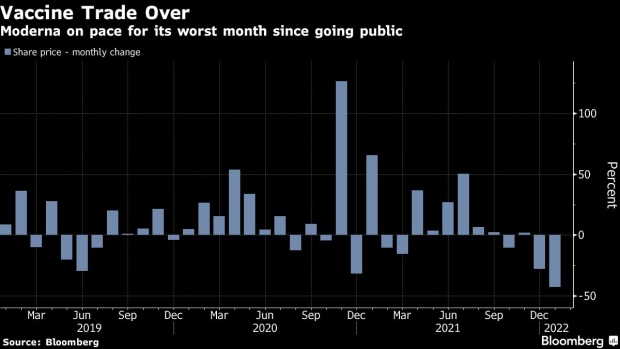 (Bloomberg) -- The vaccine makers are proving that the vaccine trade is finally over.

Moderna Inc. and BioNTech SE, two major providers of the Covid-19 inoculations that rallied amid the pandemic, have each tumbled more than 40% since the start of January, leaving them poised for the biggest monthly drop ever. Novavax Inc. fell as much as 22% on Monday alone and is down over 70% since early September. CureVac NV has tumbled, too.

The drop has been fueled by a stark shift into value stocks and away from formerly hot vaccine and biotech companies, particularly among individual investors looking for havens from the stock market’s drop.

The pandemic-era gains for the vaccine makers have fallen by the wayside as retail investors flee and the broader stock market enters correction territory. The companies have been particularly affected by conflicting early studies about the impact of booster shots on the omicron variant, a stymied federal vaccine mandate in the U.S., and the market rotation to safe havens amid widespread expectations that the Federal Reserve is poised to start raising interest rates.

Geoff Meacham, an analyst at Bank of America Corp., said Moderna fans who helped dub it the “Tesla of biotech” made a critical miscalculation of the drug approval process and expected it to be able to speed through its other pipeline candidates as fast as it did during the emergency authorization of its Covid-19 vaccine.

“There was a misunderstanding,” he said in an interview. “Drug development is not easy.”

But with many general investors pulling back from Moderna, valuations have now returned to a more fundamental level, reflecting a better risk-to-reward ratio on its pipeline of potential treatments outside of Covid-19, Meacham said. As a result, he upgraded the stock to neutral from underperform on Friday.

Runner-up vaccine makers like CureVac -- whose share price has been cut in half this year -- or Novavax are in a more precarious position than bigger rivals. While Moderna and BioNTech have seen their coffers boosted from shot sales, the smaller companies are at “a much bigger disadvantage as they don’t have as much money to spare” Meacham said.