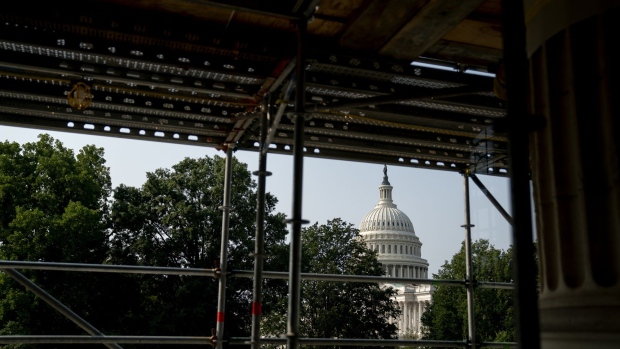 Missteps on the funding bills or debt ceiling would have profound consequences for the country and party in power, while failure to agree on a final form of the $2 trillion House-passed Build Back Better bill could cement voter perceptions that Democrats are too preoccupied with infighting to legislate.

The Senate will be the major focus of activity on the stacked December to-do list, given the need for Republican cooperation on the regular funding bills and unanimous Democratic caucus agreement to pass the separate economic agenda bill using a special budget process to avert a GOP filibuster.

The House’s priority will be the Dec. 3 deadline to avoid a shutdown while also attempting to raise the debt ceiling around Dec. 15. House Democrats are considering proposing a fresh stopgap spending measure that would keep the federal government funded through mid-to-late January, according to a person familiar with the matter.

Here are the items on Congress’s jam-packed December calendar:

The House will need to take up some kind of stopgap spending bill this week to avoid a partial government shutdown after midnight Friday, Dec. 3. None of the 12 annual appropriations bills funding federal agencies for the fiscal year that began Oct. 1 have been enacted.

Some lawmakers have talked about a stopgap bill lasting to Dec. 17 to pressure all sides to negotiate full-year spending bills, while others worry that a longer one into February or March should be enacted. The person familiar with the matter said Monday that a measure running through mid-to-late January was emerging as the likeliest scenario.

House Appropriations Chair Rosa DeLauro told reporters that Democrats are willing to strike a deal with Republicans on funding levels and urged them to make a counteroffer to Democratic proposals. Senate Democrats last month proposed a 13% increase to domestic social programs and a 5% increase for defense.

Republicans want equal increases for defense and non-defense, but have so far demanded that Democrats drop a slew of policy provisions known as riders before talks begin. Democrats have proposed ending a ban on federal funding for abortions and rescinding several limits of workplace regulations.

DeLauro said that Democrats will not give those riders up as a pre-requisite to starting talks.

Treasury Secretary Janet Yellen has warned Congress the U.S. is at risk of failing to meet all of its payment obligations sometime after Dec. 15.

Democrats in Congress haven’t settled on a plan to raise the debt ceiling, although using the same fast-track budget reconciliation process they are using to enact Biden’s economic agenda appears more and more likely. Republicans have resisted voting to allow Treasury to pay its bills.

Some Senate Republicans helped pass a $480 billion increase in October to give Democrats more time to use the budget reconciliation process but Minority Leader Mitch McConnell vowed not to do so again.

If Democrats use the budget process, they would need to amend the 2022 budget resolution and then pass a limit increase either as a standalone bill or as part of the $2 trillion tax and spending bill. Republicans have indicated they could forgo some of the procedural delays involved in amending the budget to expedite the process.

Any debt limit increase would likely last into December 2022, after the midterm election but before a possible Republican takeover of Congress which could allow the GOP to demand budget cuts or other concessions from Biden for a new increase.

The House this month passed its version of Biden’s tax and spending bill. The Senate plans to take up and pass its version before the Dec. 25 Christmas holiday.

Moderate Democrats Joe Manchin of West Virginia and Kyrsten Sinema of Arizona are the key players. Manchin has objections to the overall price tag, spending in early years paired with offsets in later years, as well as the bill’s four weeks of paid family leave and Medicare hearing coverage. Sinema has kept her specific objections largely private.

The White House has said the two would agree to about $1.75 trillion in spending, a cut from the House-passed bill which likely totals more than $2.2 trillion.

Wrangling over the federal deduction for state and local taxes, or SALT, will be one of the most contentious issues for Democrats as they re-shape portions of the House’s version of the Build Back Better Act. Senator Bernie Sanders, who is taking a lead on SALT, says the House’s approach to allow taxpayers to write off up to $80,000 regardless of income would give too many tax benefits to millionaires. Instead, he and Senator Bob Menendez of New Jersey want to limit full SALT deductibility to those earning less than $400,000, and phasing out the tax break so that the highest earners can only qualify for the $10,000 deduction currently in the tax code. Senator Michael Bennet has opposed any lifting of the SALT cap.

Senators could also revise the corporate minimum tax, which would require large companies to pay at least 15% of their financial statement profits in taxes even if they have credits or deductions that could cut their IRS bills. Some proponents for renewable energy projects say the minimum tax could decrease the value of those credits for companies.

There is no hard deadline for completing the BBB bill, so it could slip into January.

Congress has passed a defense authorization bill for 60 consecutive years even though last year was almost a SNAFU -- to borrow a military term -- when the House and Senate voted to override then-President Donald Trump’s veto of the bill on Jan. 1, two days before the new Congress started.

This week, the Senate will vote to cut off debate on the latest annual measure, likely setting up final passage in early December. There are impasses over several provisions, including blocking funds to the Taliban and removing a requirement for women to sign up for the military draft. And if the National Defense Authorization Act doesn’t make it over the finish line, troop pay raises could be added to a continuing resolution or passed on its own. DeLauro has said that until there’s agreement on full-year appropriations, she will not back a pay increase in a CR.

Schumer announced just before the break his signature counter-China legislation -- the U.S. Innovation and Competition Act -- would ride to victory on the defense bill. In an abrupt about-face a few days later, Schumer said that he would seek to negotiate with the House an agreement on a stand-alone China bill.

There’s still a few items to be ironed out there, however, as the House doesn’t have its own comprehensive bill. House Foreign Affairs Committee Chair Gregory Meeks says he wants to tackle climate change -- China is one of the world’s leading emitters of greenhouse gases -- and Republicans are concerned the bill isn’t tough enough on Beijing.

If there’s no agreement on the broader package, some lawmakers want the $52 billion in the bill to boost domestic semiconductor manufacturing passed separately. But doing so could risk fracturing the bipartisan coalition that wrote the broader bill.