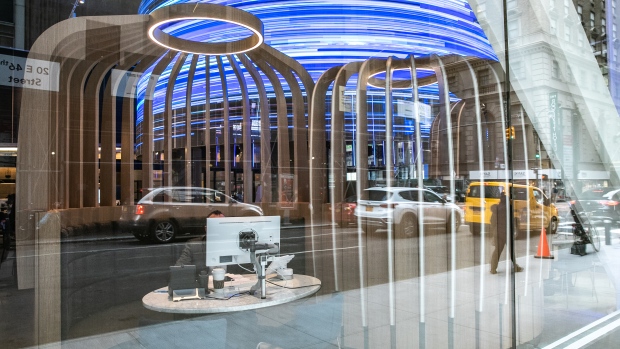 Meeting pods are seen through a window of a JP Morgan Chase & Co. bank branch on Madison Avenue in New York, U.S., on Thursday, Jan. 23, 2020. Banks have been reducing their physical presence across the U.S. More than half the country's counties lost branches between 2012 and 2017, with rural areas the most affected, according to the Federal Reserve. , Jeenah Moon/Bloomberg

A bank, a drug store, another bank: Odds are, a stroll down a random Manhattan avenue devolves quickly into a retail snoozefest.

New Yorkers have complained for years about the disappearances of their beloved family-owned restaurants, their hole-in-the-wall hardware stores, their bars. Replaced by a bank branch. A drug store. Another bank.

Now, with mobile banking on the rise, the days of the grand bank branch with Greek Revival pillars and vaulted ceilings are numbered. New York City is joining a trend that’s already sweeping the rest of the country. Fewer bank branches. Smaller bank branches. Wall Street is plotting a diminished presence on Manhattan’s main streets.

“There’s a bank on every single corner and there’s definitely a backlash on that,” said New York City historian Kevin Draper. “So many people do banking online and over their phones. Frankly, New Yorkers will be happy to see some of these places going down. But the question is, are these places going to just be vacant?”

The expiration of scores of branch leases is feeding the trend. Banks signed many of the agreements from 2002 through 2007 -- the heady days before “subprime” became a household word -- and many of them ran 15 years, according to real estate brokers.

The question of vacancies has many New York commercial landlords low-level freaking out, some of the brokers said. With the retail industry hurting, property owners cherish the steady rents paid by the world’s biggest financial institutions and don’t look forward to having to make deals to keep them or clamber to fill empty space should they leave. Nor do they love the idea of remaining branches renting less space. 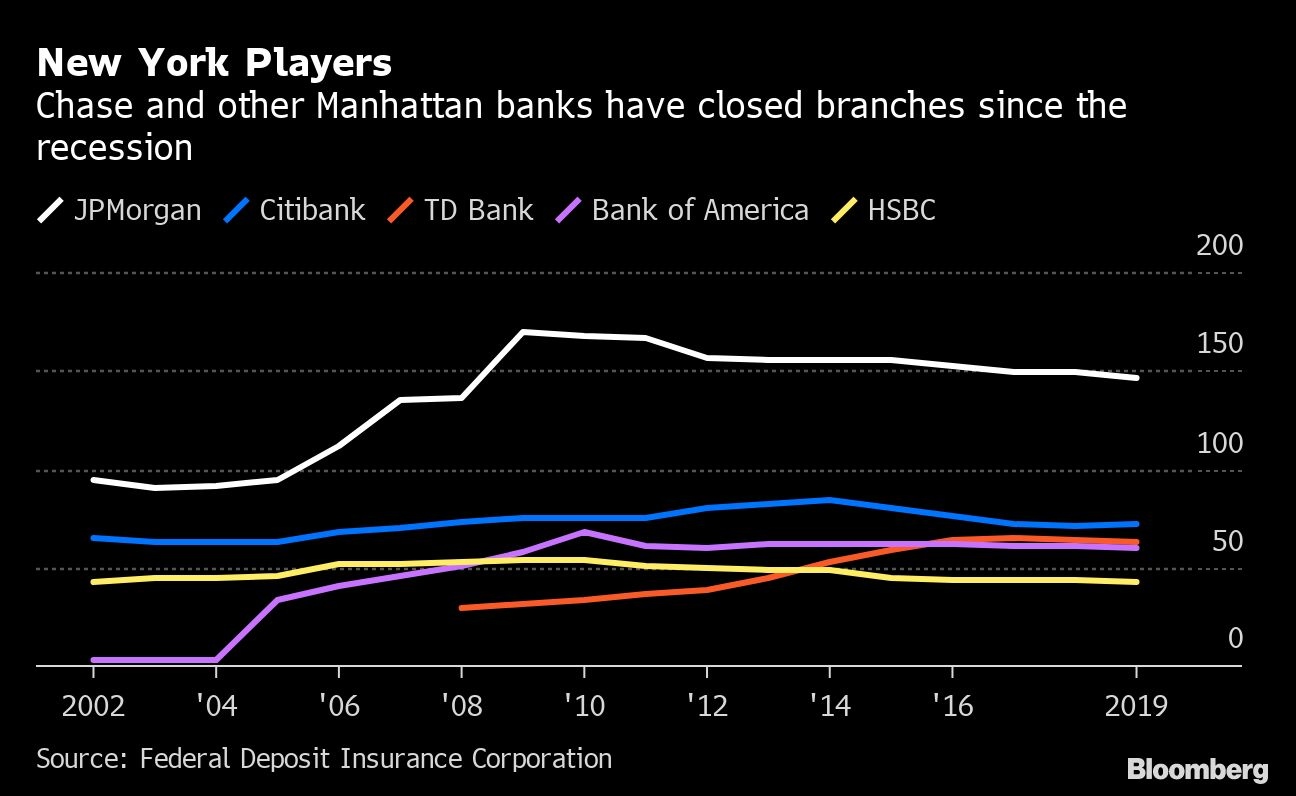 Banks have been reducing their physical presence across the U.S. More than half the country’s counties lost branches between 2012 and 2017, with rural areas the most affected, according to the Federal Reserve.

In Manhattan, the number of branches jumped nearly 50% between 2002 and 2009, according to data from the Federal Deposit Insurance Corporation. Since then, branch count has fallen around five per cent, with a 2.5 per cent decline in the past two years.

The shrinkage has contributed to declining commercial-property values in the city. Average asking retail rents dropped 8.1 per cent in the third quarter from a year before, according to brokerage Jones Lang LaSalle Inc.

Some Manhattan landlords are offering discounts in lease negotiations to keep the banks, preferring cuts in rent to the possibility of long vacancies. 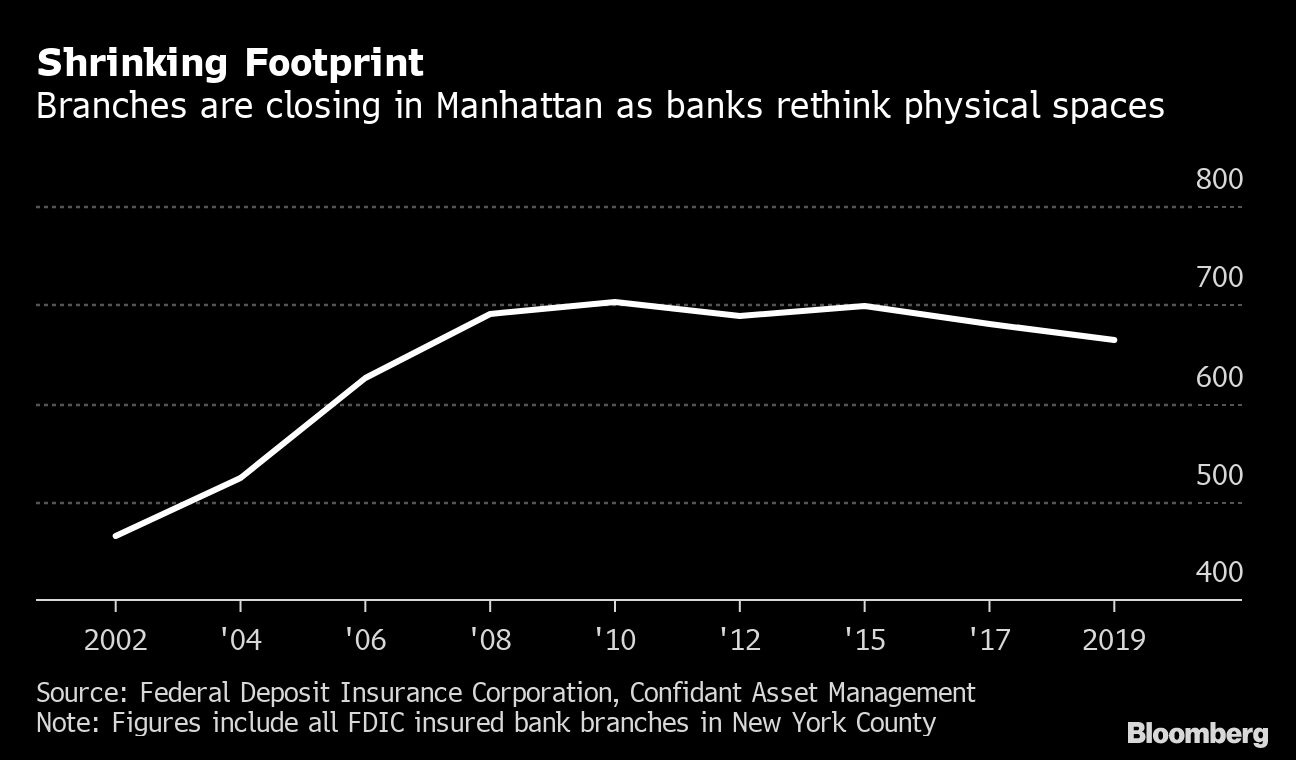 But banks have evolved. Back in the day, customers visited branches for tasks that today can be done online, said Annette Healey, an executive vice president of retail at CBRE Group Inc. Nowadays, some branches are more focused on advertising, she said. Many younger consumers rarely bank at all, favoring payment apps like Venmo for moving money.

“The nature of these branches is changing, the number of transactions being done over the counter at the branch has been falling,” said Alan McIntyre, senior managing director of global banking at Accenture Plc.

One recent lease supports that view of the future. At 28 Liberty St., formerly known as One Chase Manhattan Plaza, JPMorgan Chase & Co. signed an agreement less than two years ago that cut its space to 9,000 square feet (836 square meters) from about 30,000 square feet, according to a person familiar with the matter.

JPMorgan said its number of branches nationwide is down one per cent in the past year due to overlap -- where a storefront too close to another is shuttered -- and the rise of digital banking.

“Branches remain critically important to our customers, so we’re continuing to invest in them,” the bank said in a statement.

JPMorgan, which has the biggest bank presence in Manhattan, nearly doubled its branch count in the city from 2002 to 2009, according to the FDIC. It’s been declining since. HSBC Holdings Plc reduced its footprint by 20 per cent since 2009 while Citigroup Inc. and Bank of America Corp. have stayed flat. Toronto-Dominion Bank has also seen its growth stagnate in the past three years.

Some of the banks, such as Bank of America, expanded in Manhattan mostly due to acquisitions. Some decline in branch presence is due to banks consolidating their operations.

The branches that remain will tend to be different. One example is Chase’s flagship at 390 Madison Ave., which opened in June. It’s fitted with futuristic meeting pods, free Wi-Fi and charging stations, bankers with online tablets and a digital advice bar.

“The role that these branches are playing partly is a billboard role,” said McIntyre of Accenture, which consulted on the branch’s design. “In terms of the impact it has visually, it’s more like looking at an Apple store or the Nike store on Fifth Avenue.”