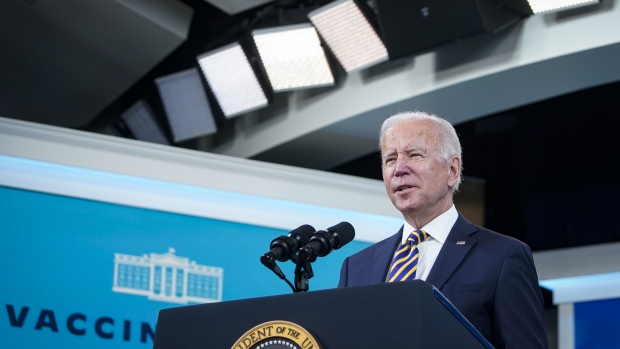 (Bloomberg) -- The move by Democrats to shrink President Joe Biden’s vision for the economy into a smaller package is turning to a debate over whether key benefits should be restricted to fewer, needier families -- potentially blunting both their impact and political support in suburban districts that will be battlegrounds in next year’s midterm election.

The White House has indicated Biden is open to stricter income caps for some programs, and a growing number of Democrats are warming to the idea as a way to cut the price tag to meet the demands of fiscal conservatives such as Senators Joe Manchin of West Virginia and Kyrsten Sinema of Arizona, both pivotal votes in the Senate.

But lawmakers representing suburban areas on the coasts, where the cost of living can leave even higher-earning families feeling financially squeezed, warn that narrowing coverage risks undermining public support for programs central to the Democratic agenda. Those include an expanded child tax credit, assistance with child care expenses and tuition-free community college.

“Many of my constituents would be considered high income in West Virginia but still struggle in Westchester and Rockland counties to afford high-quality child care and higher education,” Representative Mondaire Jones, who represents suburban areas of New York’s Hudson Valley, said. “The federal government has historically done a bad job of defining poverty.”

To fit what started out as a $3.5 trillion package of taxes and spending into a framework of roughly $2 trillion, Democrats are mostly working with options that include eliminating components. One example: jettisoning a plan championed by Senator Bernie Sanders to add hearing, dental and vision benefits to Medicare.

Delaying programs or having them expire early and reducing benefit levels are other options. Lawmakers also can restrict who is eligible for new or expanded benefits.

Manchin has focused on means testing -- limiting benefits to people whose incomes are below a certain level -- and work requirements, saying the country must avoid “an entitlement mentality.” He also is seeking to cut some programs as he tries to reduce the cost of the economic package down to $1.5 trillion.

The struggle reprises a long-standing tension among advocates of social benefits between helping those most in need and more broadly supporting Americans as they confront financial stresses. Universal entitlements such as Social Security and Medicare are among the costliest government benefits, but politically sacrosanct because of their reach across society. Other assistance -- such a food stamps and Pell Grants for college -- are limited to poorer Americans, and historically have faced battles for funding.

The conflict can supersede ideological divisions within the Democratic party. The Congressional Progressive Caucus joined with swing-district colleagues including New Jersey’s Representative Mikie Sherrill -- who in 2018 became the first Democrat in more than three decades elected to represent her affluent suburban constituency outside New York City -- to lift an income ceiling on the Democratic plan’s child-care benefit.

The divisions reflect differences in the economic circumstances at home. In West Virginia, fewer than 10% of households had incomes above $100,000 in 2019, according to a U.S Census survey. In New Jersey, more than a quarter did, and the portion is higher still in the suburban regions surrounding New York and Philadelphia.

“Republicans have been very effective historically at pitting groups of people against each other, particularly against lower-income people of color as being undue recipients of government relief,” Jones said in an interview. “We avoid those problems when everyone is covered by a social safety net.”

Democratic pollster Celinda Lake, who polled for Biden’s campaign, said she hasn’t tested public opinion on the impact of stricter means testing, but the resonance across society of family-life challenges such as child care, college tuition and health coverage is central to the Democratic agenda’s political appeal.

“The secret sauce of the ‘Build Back Better’ program is that people think it helps them, that it deals with real problems and things that could happen to anyone, and Covid more than anything has shown that,” Lake said.

Biden and other Democrats have long promoted his economic agenda as geared toward bolstering the middle class, a broad category that surveys show as many as 90% of Americans consider themselves as a member.

The centrist House New Democrat coalition, a group of 95 lawmakers who in many cases represent higher-income areas, homed in on those promises as it pushed back against calls to lower the income limits for the child tax credit.

“Scaling back or limiting the accessibility of this critical pillar of President Biden’s agenda would hurt middle-class families and our children’s futures,” said the group’s chair, Representative Suzan DelBene, whose Washington state district includes suburban Seattle. She added that members of the coalition from battleground districts are “majority makers in the House, and it is our constituents who would be left behind.”

Couples earning up to $150,000 annually have been eligible under Biden’s March pandemic-relief bill for an expanded child tax credit of $250 or $300 per month per child, depending on the child’s age. Couples earning up to $182,000 can receive part of the credit. The New Democrats want the expanded child tax credits, which otherwise would expire at year-end, continued as is, and highlight it as a marquee middle-class tax cut.

Jason Furman, a senior economic adviser to former President Barack Obama who favors more aggressive means testing, said it is “the least-bad trade-off” and will keep a scaled-down package focused on areas where it is most effective. For instance, financial help for preschool is most effective in promoting education and future economic growth when it goes to families that otherwise wouldn’t have been able to afford it or been forced into a low-quality school, he said.

Furman rejects arguments that targeting pieces of the package at the neediest will imperil them over time, citing the durability of means-tested benefits such as Medicaid and Pell Grants.

“I do not have reason to doubt a member of Congress’s view that they will benefit more in the next election by giving more money to more people,” Furman said. “But I seriously doubt that the long-term political survival of a program is impaired by means testing.”