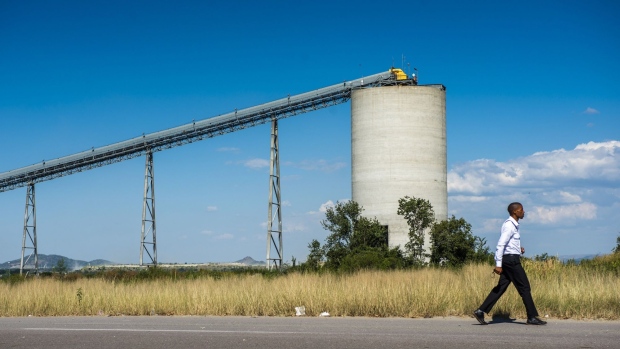 A conveyor at the Sibanye Stillwater Ltd. mine in Rustenburg, South Africa. Photographer: Waldo Swiegers/Bloomberg , Bloomberg

The Johannesburg-based precious metals producer sees output at its Stillwater mines at 445,000-460,000 ounces this year amid rising costs and flooding in the area in June, according to a presentation published on its website on Thursday.

The US mines, which were initially forecast to produce between 550,000 ounces and 580,000 ounces of palladium and platinum, were forced to halt activities for seven weeks after Montana was hit by widespread flooding following a warm spell that led to a rapid melt of snow in the mountains.

Read: Sibanye Suspends Work at US Palladium Mines After Flooding

Sibanye’s dealmaking Chief Executive Officer Neal Froneman acquired Stillwater Mining Co. for $2.2 billion in 2017. That effort to diversify away from South Africa paid off as surging metals prices allowed Sibanye to resume paying dividends two years ago and recoup its investments. However, the Montana mines have lately been plagued by operational challenges worsened by Covid-19 disruptions and skills shortages, the company said.

Palladium and platinum output at the Stillwater mines fell 5.5% to 570,000 ounces last year after a rail collision. Sibanye still aims to raise output to about 700,000 ounces by 2027, less than the 850,000 ounces originally planned. For now it’s “prudent to defer capital investment on original growth project and re-engineer the operations to protect margins and long-term value,” the company said in its presentation.

The miner said it expects the palladium market to swing into a surplus from the middle of this decade and that future price weakness requires operational repositioning. This means postponing spending initially planned at its Blitz project in Montana.

“It just doesn’t seem to make good or smart commercial sense to spend millions or billions on a capital project which will deliver into price weakness into the future,” Froneman said on a call.

“Hence with our view of the palladium market plus the macro-economic environment we are going to be dealing with going forward, we really need to reconsider what’s the best way of extracting value out of the assets,” he added.

Sibanye doesn’t plan to change the output profile for its South African mines, which also produce platinum’s secondary metals such as rhodium and iridium, Richard Stewart, the chief regional officer for Southern Africa, said on the call.