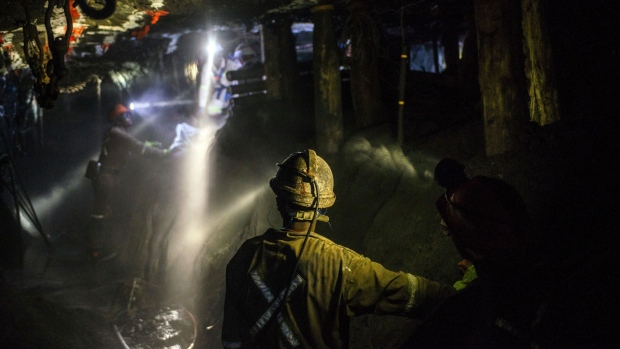 Lights from miners safety helmets illuminate the mine shaft during a media tour of the Sibanye-Stillwater Khuseleka platinum mine, operated by Sibanye Gold Ltd., outside Rustenburg, South Africa on Wednesday, Oct. 16 2019. Sibanye said it’s on track to resume paying dividends next year, should the company settle a wage dispute with platinum-mine workers without too much disruption. Photographer: Waldo Swiegers/Bloomberg , Bloomberg

(Bloomberg) -- Sibanye Stillwater Ltd.’s efforts to buy gold assets in the Americas have been stymied by gold’s record-breaking rally which led to mining company ratings being boosted and asset prices rising.

The Johannesburg-based precious metals producer explored opportunities at three North American gold producers with assets in the region and in Brazil two years ago, company spokesman James Wellsted said. While Sibanye, famous for its deal-making prowess, is still keen to buy gold mines in North America, those assets are now considered too expensive and may not add value to investors, according to Wellsted.