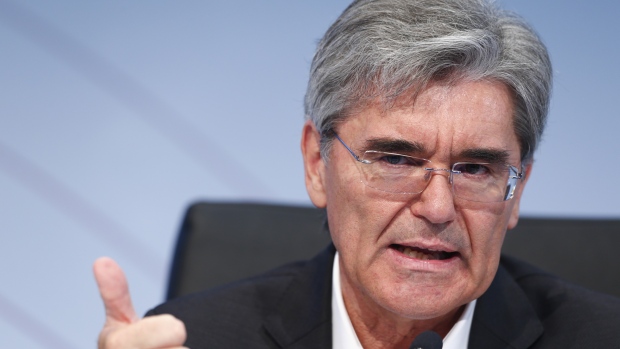 Siemens AG Chief Executive Officer Joe Kaeser may have been looking for love in all the wrong places as he tried to engage with Europe’s top antitrust official on a troubled plan to merge with Alstom SA.

The head of the German engineering company is locked in battle with Margrethe Vestager to gain approval for the companies’ planned rail tie up. He may live to regret his Monday morning tweet.

“Those who love Europe should shape their future and not lose themselves in backward formulas. It must be bitter if you are technically right but do everything wrong for Europe,” Kaeser wrote. He was responding to a picture Vestager tweeted with the caption “because we love Europe, we must change it.”

Kaeser’s words represent a tacit admission that the EU is set to block the deal and in doing so would be within its rights under the region’s competition law. This may leave the German and French companies with little wiggle room to contest such a decision.

The EU’s chief antitrust economist, Tommaso Valletti, jumped into the lovefest, responding that it “must be the first time” someone acknowledges the competition body’s work is technically right.

Vestager has come under intense political pressure to approve the deal that the companies seem to have long known could be problematic from an antitrust point of view. In unveiling their combination 1 1/2 years ago, they stressed a greater need to create a “European champion” to compete worldwide with an emerging rival from China.

Rhetoric has risen in recent days, with French Finance Minister Bruno Le Maire saying in a tweet Sunday that "nothing can justify" an EU veto of the deal. The European Commission is set to make a decision on the rail merger on either Feb. 6 or Feb. 12.

German executives are generally shy on social media, with Kaeser and SAP CEO Bill McDermott among the only top bosses to write regularly.

--With assistance from Peter Chapman.