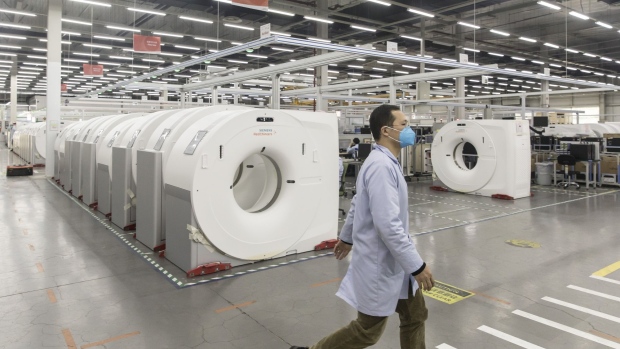 An employee wearing a protective face mask walks by the computed tomography (CT) full body scanner machine production line during a media tour at a Siemens Healthineers AG factory in Shanghai, China, on Monday, Feb. 24, 2020. Central and local governments are loosening the criteria for factories to resume operations as they walk a tightrope between containing a virus that has killed almost 2,600 people and preventing a slump in the world’s second-largest economy. Photographer: Qilai Shen/Bloomberg , Ed Hammond and Nabila Ahmed

(Bloomberg) -- Siemens Healthineers AG is in advanced talks to buy Varian Medical Systems Inc. in a deal that could value the company at about $15 billion, according to people familiar with the matter.

The deal could be announced in coming days, according to the people, who asked not to be identified because the deal isn’t yet public. Plans aren’t final and the deal could still fall apart.

Representatives at Healthineers and Varian couldn’t immediately be reached for a comment.

Shares of Palo Alto, California-based Varian have risen 0.5% this year, giving the medical equipment maker a market value of almost $13 billion. The stock recently traded at 38 times estimated earnings, compared with a multiple of 18 for the S&P 500 Health Care Index.

Healthineers, a spinoff from Siemens AG in 2018, has risen 2.7% this year. The Erlangen, Germany-based company said two months ago its coronavirus antibody test received U.S. Food and Drug Administration’s Emergency Use Authorization, which would allow users to identify recent or prior infection.